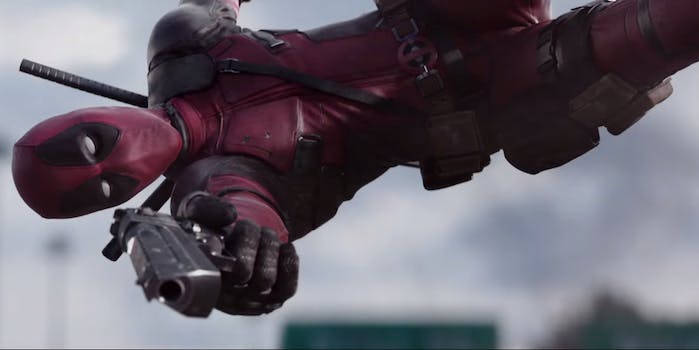 The ‘Deadpool’ trailer is an expletive-laden delight

We thought our hopes couldn’t possibly be any higher for the Deadpool movie than they were on Monday, when Ryan Reynolds and his alter ego Wade Wilson released a teaser trailer teasing tonight’s trailer release.

But now the moment—and the very NSFW trailer—are here. Friends, prepare to have your expectations blown away.

Unless Fox has managed to sneakily edit out all the terrible parts this movie is going to be amazing. Fans worried the studio would stint on the R rating and tone down the character’s notorious vocabulary have long had confirmation that their fears were unnecessary; but the biggest concern of all—that the story would erase the truly horrific, violent, and traumatic aspects of Wade’s origin story—also seems to have been null. It’s all here, including the years Wade spent being a one-man human testing lab for the vile Weapon X program, and the chronic pain and disfigurement it left him with.

Much of this trailer is taken from a reshoot of the original leaked test footage we all freaked out about more than a year ago, but it’s still awesome, and it comes with the promised Salt-n-Pepa soundtrack that early Comic-Con viewers loved.

Of course, astute fans are already pointing out problems, concomitant to recent negative reactions to Marvel comics and films appropriating black culture while leaving out creatives and cast members of color:

But hey, we’ve waited years for this film. Hopefully future looks will continue being totally awesome without making us wince in embarrassment due to a lack of diversity.

Deadpool lands in theaters Feb. 12. In the meantime, you can practice your best impression of the Merc with a Mouth while chowing down on tacos in his honor.