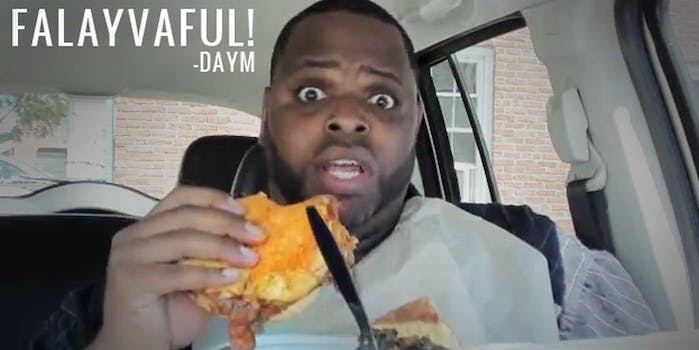 Daily Dot favorite Daymon Patterson continues moving on up in this multimedia world this week.

Daily Dot favorite Daymon Patterson continues moving on up in this multimedia world this week. The YouTube food reviewer, who first came into public eye last summer when his in-car review of Five Guys Burgers and Fries went ballistic on the Internet, announced Tuesday that he’s going to have a food reviews show premiering on The Travel Channel.

“Best Daym Takeout” won’t revolve around Patterson’s signature fast food diet that’s made him such a popular YouTube personality. Rather, the show will find Big Daym cruising around the country reviewing various takeout establishments throughout each city. Think Shake Shack in New York, Japadog in Vancouver, or Anna’s Taqueria in Boston.

There’s no word quite yet on the details concerning a premiere date.

Either way, it’s great news for The Travel Channel and even better news for Daymon Patterson, who the Daily Dot has covered en masse.

The Connecticut native was working at a CarMax near Hartford when one of his many lunchtime reviews got picked up on Reddit. A few days later, he was the talk of the town, getting picked up by Gawker, NBC, and a whole slew of additional outlets. By the time we profiled him in August, Patterson had already quit his job and begun making videos full-time.

Patterson made his television debut on Late Night with Jimmy Fallon just a few months later.