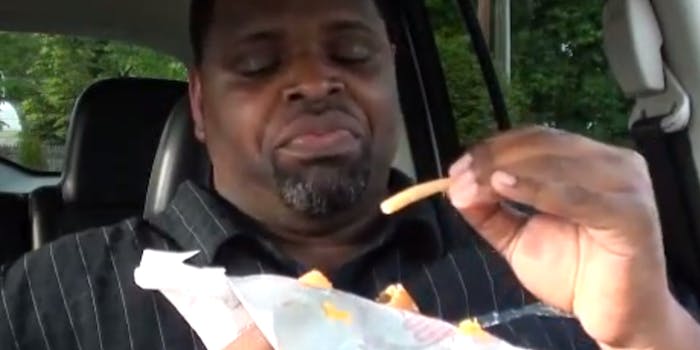 Daymon Patterson reacts to fast food like Homer Simpson does to finding a penny, earns a tribute from the Gregory Brothers in the process.

Look, Anthony Bourdain. You can travel to countries far and wide and eat the most exotic cuisine from top-shelf chefs and sit in really expensive chairs, but the most entertaining food reviewer these days is nestled somewhere in Hartford, Conn.—and he’s taking a hard look at a box of milk shakes.

Daymon Patterson is the affable personality behind Daym Drops, a YouTube channel dedicated to the most delicious and delectable. From the front seat of his four-door sedan, Patterson spits common man wisdom on some of the most popular foods on the market.

What is this new Royal Mint. What?” he asks at the beginning of his most recent video, “Dairy Queen’s Royal Mint Shake Review.” “Royal Mint, Oh! And it’s a shake? Oh I got to do this, man!”

With 48 review videos under its belt, Daym Drops, Patterson’s YouTube channel is both Super Official and officially nice. They’re outlandish and divine, a full-on product of Patterson’s animated facial expressions, uncommonly theatrical voice, and ability to sensationalize the mundane.

“Oh, you sexy pieces of chocolate,” he says while looking at the camera.

His Five Guys Burgers and Fries review became a hit over the weekend, racking up more than 379,000 views.

Per a tip from Symphony of Science maestro John Boswell, the Gregory Brothers just paid tribute to the viral sensation in song.

Super Official for real, Daymon. Go on and get yourself something good to eat. You’ve earned it.