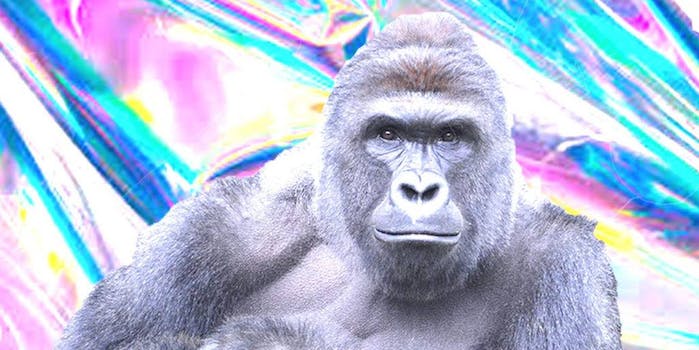 Day for Night Festival will create a tribute to the deceased gorilla.

At first glance, Day for Night Festival’s lineup might cause a shock to your system. Not because electronic DJ Aphex Twin will make his first return to the U.S. in eight years at the Houston-based festival, or because of any other impressive names at the top of lineup like Bjork and ODESZA.

Because of Harambe, obviously.

The Day for Night lineup dropped on Wednesday and fans immediately noticed that everyone’s favorite gorilla is listed at the bottom.

The festival’s site explains that Harambe won’t actually be resurrected for the three-day festival but he will be commemorated with a hologram.

Festival founder Omar Afra told the Daily Dot in an email that the hologram will be 72 feet tall and about 34 inches wide. He said Day for Night decided to include Harambe after his agent contacted them and made the pitch.

Afra said he thinks Harambe would be proud to be included.

“He tried to get on the lineup last year,” Afra said, “But unfortunately we could not fulfill his rider of 37 crates of bananas.”

Update 1:38pm CT, Sept. 15: As reported by Uproxx: “[T]he music fest’s organizers stated ‘it was a joke’ and immediately removed all mentions of the gorilla from their site, as to avoid any further confusion.”