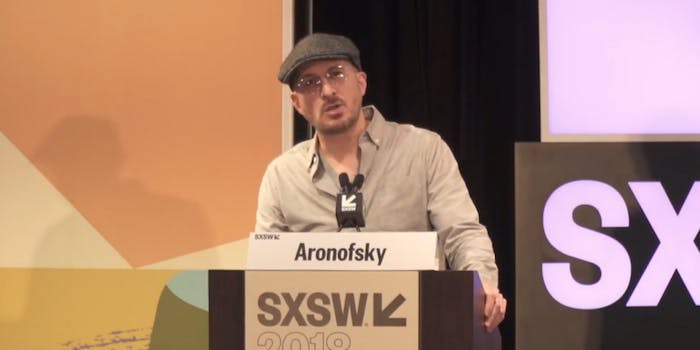 SXSW Film: Darren Aronofsky on the 10 commandments of filmmaking

'How am I doing? Am I boring you people?'

Director Darren Aronofsky gave the SXSW Film keynote on Saturday morning and it got off to a bumpy start: He needed coffee. It became the running joke of the hour-long keynote, and halfway through he finally got a cup, but in-between he discussed his films and their themes and offered up the 10 commandments for filmmaking.

Aronofsky, who was wearing a hat but no scarf, admitted he’d never been to SXSW, and got in an early self-own when he asked if anyone saw The Fountain screen at Fantastic Fest in 2006 and was met with mostly silence. He talked that film’s rough road to production and the obstacles and lukewarm test screenings that befell his films. Most notably: Pi, Requiem for a Dream, The Wrestler, Black Swan, Noah, and mother!

A filmmaker friend told him Requiem for a Dream would be better if they got rid of Ellen Burstyn’s character (later in a Q&A, Aronofsky revealed Jared Leto injected himself with water on the Requiem set), and people told him of Black Swan: “Horror fans don’t like ballet, ballet fans don’t like horror.”

The talk was structured around his 10 commandments of indie filmmaking. “Make the film only you can make” was the first. “I’m every character in every movie,” he explained. “Work with family” was another, and he urged filmmakers to “Always be a friend to the actor.” (Although he didn’t touch on his romantic involvement with women in his movies, like Rachel Weisz and Jennifer Lawrence.)

He talked about the three-and-a-half month long rehearsal for mother! There were no walls, much like Lars Von Trier’s Dogville, just tape on the floor. There were only three shots in the whole film, either over Lawrence’s shoulder, on her face, or her point of view. He reiterated that mother! is about the destruction of Mother Earth and that Javier Bardem’s character is a stand-in for God, even though many critics pointed out Aronofsky’s muse problem after it was released. Some people had different reactions to the film, from disgust to involuntarily laughter. Even the story of the creation of the title mother! has become a meme.

Other commandments included “Commit to the vision” and “Don’t forget your audience.” His final commandment was to “Give a shit,” because “art is about disruption” and “making something deeply human.”

While not a commandment, he did offer some solid advice for anyone in the film industry. “Never stick a gun in a movie star’s hands.”