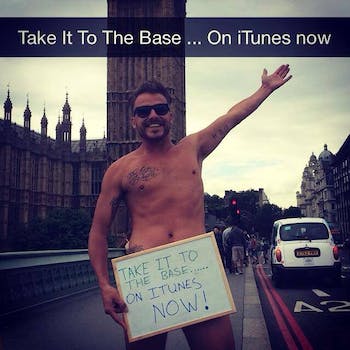 On paper, it looks like British Vine star Dapper Laughs has hit the big time. He’s got his own TV show, he’s on a comedy tour of the UK, and his debut single reached the top 10 on iTunes in the UK. But outside his core audience of Vine fans and wannabe pickup artists, Laughs is probably better known for mocking homeless people and having his TV show described as “ a rapist’s almanac.”

Dapper Laughs, real name Daniel O’Reilly, has managed to rack up 594,000 Vine followers and 1.7 million Facebook fans thanks to his comedy Vines and one-liners about sex, girls, and drinking. A typical example involves him running away from a girl’s bedroom on the morning after a one night stand. Don’t bother trying to find the punchline, because there isn’t one.

O’Reilly’s most famous catchphrase is “proper moist,” which, incidentally, is the title of his first single. Sample lyric: “They’ll be hatin’ on me for just havin’ a bit of fun/’Cause I’ll track her down and fuck her mum/She knows/And if she’s lookin at me but playin’ with her hair/By the end of the night she’ll need a wheelchair/She knows.”

“She knows” is O’Reilly’s other catchphrase. It usually comes into play when a woman notices he’s filming her for one of his Vines.

His TV show Dapper Laughs: On The Pull frames him as a dating advice expert who uses a combination of British lad culture and pickup-artist tips to help guys get laid. It’s easy to see why so many people consider O’Reilly to be an idiot, a misogynist, or both. There’s a strong case to be made that O’Reilly got his TV deal as a result of Vines that border on sexual harassment.

@Liam_Mooree if your not sure if she likes you show her your cock, if she cries she’s a lesbian.

Remember, its only sexual harassment if she’s more attractive then you

O’Reilly isn’t very famous overseas, but he is something of a C-list celebrity in the UK, mostly thanks to his various controversies. 48,000 people have signed a petition demanding that his TV show be cancelled, and the homeless charity Shelter is refusing to accept any donations from his Christmas charity album, “Proper Naughty Christmas.” Despite O’Reilly’s repeated protests that the album is meant to benefit “the homeless,” it includes songs with titles like “A Walk To The Pub… With A Tramp.”

A tramp just asked me what I was looking at,”Your tooth” I said,he laughed, which revealed two more random teeth, which ruined the joke.

Just to confirm: we won’t be accepting donations (however small!) from @dapperlaughs for reasons @UsVsTh3m make clear http://t.co/hWfS3CM3nX

Last week, after the website Usvsth3m suggested that people donate money directly to Shelter rather than buying O’Reilly’s album, he allegedly used Snapchat to tell his fans to harass two Usvsth3m writers on Twitter. This week, he fell back into the spotlight after someone unearthed footage from a recent comedy gig where he said a female audience member was “gagging for a rape.”

“Do you want to come backstage after?” he added. “Bring two of your mates, you’ll need them.”

O’Reilly had been commenting on the accusations that his TV show and social media persona promoted rape culture. “If it was a guide to rape, I would have done one five-minute episode,” he joked about Dapper Laughs: On The Pull. “[I’d] come on and go ‘Oi oi, I’m Dapper Laughs, go down the shops, get some rope, bit of duct tape, rape the bitch, well done, see you later.”

With more and more people accusing O’Reilly of sexism and calling for his show to be cancelled, ITV, the network airing his show, was forced to respond. “Comedy is subjective and we appreciate the content of the show might not be to everyone’s taste,” said a spokesperson from ITV. “We regret that any of our viewers were offended. However, as with all of our shows, the series content was carefully considered, complied and deemed suitable for broadcast.”

O’Reilly himself posted a rather nonspecific apology on social media, saying, “Some comedians push the boundaries in the name of entertainment. That means taking risks. But I think it’s important that if we over step the mark and cause people upset that we apologise.”

O’Reilly is far from the first social media star to make a career out of harassing women. Sam Pepper , a YouTube “prankster” whose best-known videos involved him groping women on the street, was recently accused of multiple accounts of sexual assault. This particular genre of prank video is now so common that it almost feels more boring than offensive.

While O’Reilly seems to think of himself as a risk-taker who “pushes the boundaries” of comedy, others consider painfully simple sexist humor to be about as old-fashioned as you can get. The only difference between O’Reilly’s Dapper Laughs persona and his previous work as a cruise-ship entertainer is his viral success online. This may have created the illusion that Dapper Laughs is yet another cool millennial trend just waiting to be monetized, but his promoters are now learning the hard way that Vine success does not always extend beyond that six-second video loop. Despite ITV’s assurances that his show was “deemed suitable for broadcast,” it’s likely that some people are now seriously regretting their decision to give him a TV deal.

The Daily Dot reached out to ITV and Daniel O’Reilly for comment and we will update if they respond.

Update 12:25pm CT, Nov. 10: On Monday evening, U.K. time, ITV backtracked and announced that it would not renew O’Reilly’s show for a second season.