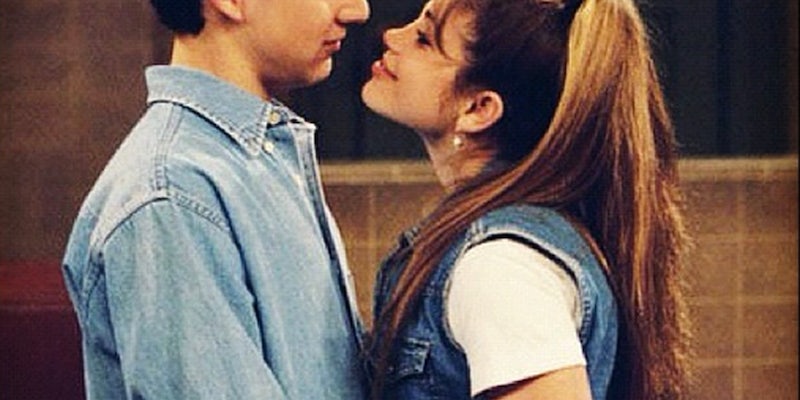 On her as-yet-untitled blog, the actress everyone knows as Topanga is sharing her excitement about the new spin-off series Girl Meets World.

As a rambling, self-absorbed, boy-crazy millennial, it was only a matter of time before Topanga Lawrence joined Tumblr.

The actress behind the official heartbreaker for boys in the ‘90s, former Boy Meets World star Danielle Fishel is now on Tumblr, writing about Girl Meets World, the upcoming sequel. Set to air on the Disney Channel, the show will star Fishel and Ben Savage (who played Cory Matthews).

GMW show picks-up where BMW left off: Cory and Topanga are now married and raising a 13-year-old daughter. To the delight of twenty-somethings everywhere, Fishel is as excited to join the spin-off as you are to live-tweet it.

“I promise with the entirety of my heart that we will make GMW with the same honesty, innocence, and intelligence that you learned to expect from BMW,” Fishel wrote on her still-untitled Tumblr blog.

As the show is still in early stages of development, Fishel didn’t reveal any spoilers or reveal which other actors would be involved in the show. But that doesn’t mean we should be pessimistic that we won’t hear poetic ramblings from Shawn Hunter (played by Rider Strong).

“But because I have known Michael Jacobs, Ben Savage, Rider Strong, Will Friedle, and Bill Daniels for 19 years, I know we share many of the same feelings regarding the 7 wonderful years we spent making BMW,” Fishel wrote in her candid note.

Once news started leaking that the 1993 ABC series would be revived, audible fan excitement grew across the Internet that attracted Fishel’s attention.

“We felt honored. We felt nostalgic. We felt touched by the excitement in your comments, tweets, Tumblr, and Facebook posts,” wrote Fishel, who previously hosted a Talk Soup-like show on E!’s sister network, Style. “But most of all, we felt inspired. We felt inspired to bring these characters back to life and to tell you more of their stories.”

She warned nostalgic fans that GMW would be a different show from its predecessor, and not to expect a new season of BMW. Although the show, if greenlighted, will maintain familiar faces and messages, but Fishel told fans to give it a chance as it evolves.

“Your love, dedication, and appreciation means more to us than you could ever know and it will be the driving force behind our passion to make the best show we can possibly make,” wrote Fishel “Thank you for giving us the chance to do it again.”