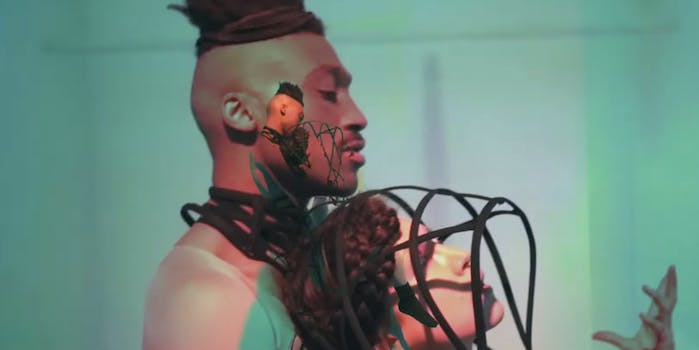 Choose your own adventure.

If you need to escape the reality of things like Donald Trump’s presidential announcement today, Baltimore musician and artist Dan Deacon’s new interactive video for the song “Meme Generator” is a good place to start.

Deacon, who was also recently featured in Adult Swim’s infomercial about the dangers of allergy meds, has never been afraid to cleave open those darker parts of the brain. This video show dancers inhabiting different rooms of a house while twerking, backbending, and having some sort of ecstatic breakdown, and you can interact with them.

Directed by Monica Mirabile, “Meme Generator” is an exploration into how our bodies are programmed. She explained: “The players are downloaded into a digital world and asked to play the game of semiotic codes interacting with the ‘house.’” She explains she “gave no rules, just asked for a response derived from the choreographers own relationship to the ‘program’”:

The program being the familiar space of the house. I’m most directly inspired by the choreography of the people that surround me, as we are all affected by a similar marketed reality. We all play the game.

You can indeed play the game right here. You just have to download a plugin first.

This and Björk’s new virtual-reality video for “Stonemilker” make for a nice digital web to get lost in.