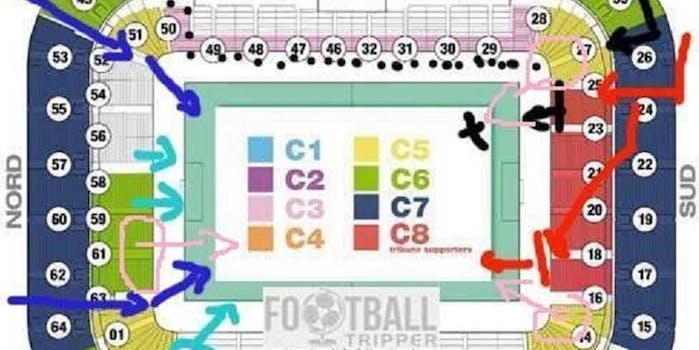 Croatian ultras have been causing chaos on the field for their national team and apparently plan to continue doing so in Tuesday’s match against Spain. If they’re successful, Croatia’s national team could be disqualified from the rest of the Euro 2016 tournament.

The extremist fans recently posted on Facebook their stadium infiltration layout, similar to what they published prior to their demonstration in Croatia’s match with the Czech Republic last Friday. According to the photo caption, a group known as U.V. will provide additional reinforcements. Their plans of action appear to be crudely drawn in with the use of Microsoft Paint.

During Croatia’s previous game, the ultras protested in the last minutes of the game by throwing flares onto the field and starting riots in the stands. The Croatian team led the Czech Republic 2-1 when fans disrupted the match with pyrotechnics, but the game ended in a 2-2 draw.

These protests aren’t the first of Croatia’s ultra fans. Their most notable demonstration occurred last summer, when they burned a swastika into the pitch in a qualifier match against Italy.

Ultra fans often have political or sometimes racist agendas. In this case, Croatia’s fans have one clear goal: to bring down the Croatian Football Federation and what is thought to be a corrupt leadership—namely, Zdravko Mamic and Davor Suker.

Mamic manages the Dinamo Zagreb football team, Croatia’s most powerful club, and Suker serves as the federation’s president. The latter is also a member of the executive committee for the Union of European Football Associations, better known as UEFA. Fans are more than unhappy with the two, as they are under fire for unfair player contracts, alleged embezzlement, and apparent manipulation. This explanation post on Reddit breaks down the controversy.

Meanwhile, with the prior warning via Facebook, some are pressuring the French to lock down on security. If fans managed to enter the stadium with flares, it’s questionable what else they could smuggle through.