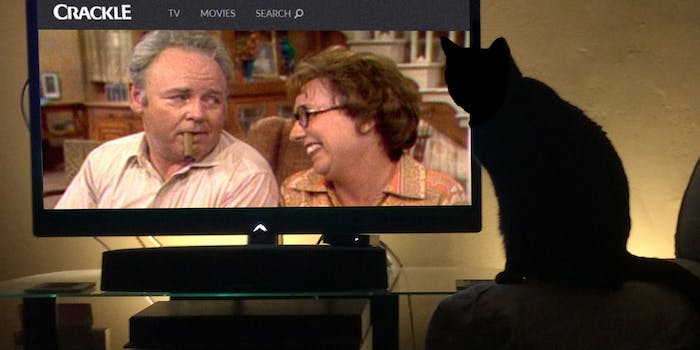 8 shows you need to watch on Crackle

Because you needed one more streaming service in your life.

With Netflix, Amazon Prime, and Hulu competing for viewers’ time and attention, there’s a good chance Crackle isn’t even on most people’s radar. The Sony-owned streaming service has been around for years, but while it’s gotten some press courtesy of Jerry Seinfeld’s Comedians in Cars Getting Coffee webseries, it definitely has yet to find its equivalent of House of Cards or Transparent—an original series that could make Crackle a household name.

Still, Crackle might be worth adding to your rotation, because it’s currently the exclusive streaming home for several classic shows that aren’t available on the “big three.” Here are eight shows that prove why Crackle is more than just that guy with the funny hat who hangs out with Snap and Pop.

I’m sure I wasn’t the only person who was mid-way through binge-watching The Larry Sanders Show when Amazon yanked it from the Prime streaming catalog a while back, and it still hasn’t returned. All six seasons of Larry Sanders available on Crackle is a compelling enough reason enough to check out the service. The Emmy and Peabody Award–winning series stars Garry Shandling as Sanders, a self-absorbed late-night talk show host who doesn’t like people but does like attention. Arrested Development’s Jeffrey Tambor is Hank Kingsley, Larry’s insecure sidekick, and Rip Torn is his unshakable producer Artie. The “show within a show” format opens the door for constant celebrity cameos by folks like Billy Crystal, David Duchovny, and Bobcat Goldthwait, and the supporting cast boasts the likes of Janeane Garofalo, Jeremy Piven, and Bob Odenkirk. If you dig shows like Curb Your Enthusiasm, Louie, and Arrested Development, the groundbreaking Larry Sanders helped pave the way for them all.

In a perfect world, either Netflix, Amazon, or Hulu would have thrown down some of that subscription money to ensure all five seasons of the underrated NBC sitcom NewsRadio were streaming in perpetuity. As it stands, we’ll just have to make do with the first two seasons available on Crackle (or just go invest in the DVDs). Created by Paul Simms—who previously wrote for The Larry Sanders Show—NewsRadio featured one of the best ensemble casts in sitcom history, including Dave Foley, Stephen Root, Maura Tierney, Vicki Lewis, Khandi Alexander, Joe Rogan, and the late, much-missed Phil Hartman as blowhard news anchor Bill McNeal. Even Andy Dick manages to be charming and non-punch-worthy, and that’s saying something. The show holds up beautifully—far better than, say, Friends—so it’s criminal that it’s not more widely available. If you can make it through the stun gun episode without crying from laughter, you may already be dead.

3) Comedians in Cars Getting Coffee

If you’ve heard of Crackle at all prior to this point, it’s probably because of Comedians in Cars Getting Coffee. Created and hosted by Jerry Seinfeld, Comedians features the star… well, in a car… getting coffee… with comedians. Over six seasons, Jerry has shared a cuppa joe with folks ranging from his Seinfeld collaborator Larry David to Mel Brooks, from David Letterman to Sarah Silverman to Louis C.K. and Jon Stewart. Episodes range between 12 and 20 minutes, each featuring a different vintage car as Seinfeld scoops up his guest and heads to a coffee shop or restaurant for coffee. But as with most things, it’s less about the destination as it is the journey—or rather, the often silly, sometimes profound conversations that unfold along the way. All six seasons of Comedians in Cars Getting Coffee are streaming on Crackle, and the show’s already been renewed through season 9.

This series debuted on Sony’s PlayStation Network, where it was ostensibly hosted exclusively. Thankfully for those whose curiosity about the show was thwarted by the lack of a PlayStation, Powers’ debut season is available on Crackle in full. Based on the acclaimed comic series created by Brian Michael Bendis and Michael Avon Oeming, Powers is a police procedural drama set in a world where superpowers are real and cops are tasked with taking down people who can throw cars through buildings. Los Angeles Detective Christian Walker (Sharlto Copley) used to be one of those spandex-wearing, car-flinging types, under the alias of “Diamond,” before his powers were stripped away by his nemesis, the psychotic Wolfe (Eddie Izzard). Now saddled with a new partner (Susan Heyward), Walker must deal with the renewed threat of Wolfe, his own inner demons, and an ever-swelling docket full of bizarre cases pulled straight out of the funny pages. Powers will return for a second season on the PlayStation Network—and, presumably, Crackle.

If you prefer your superhero deconstruction to be a bit sillier, look no further than this one-season Fox adaptation of Ben Edlund’s beloved big blue bug of justice. Patrick Warburton stars as The Tick—no alter ego, simply The Tick—a loud, well-meaning, super-powered doofus in an insect costume who is committed to defeating evil in all its forms. The Tick is perpetually making life difficult for his long-suffering sidekick Arthur (David Burke), and he spends his down time hanging with fellow super-people Batmanuel (Nestor Carbonell) and Captain Liberty (Liz Vassey). In between punching murderous Cold War-era robots and trying to land membership in the prestigious League of Superheroes, The Tick navigates the American judicial system, utterly fails to understand Arthur’s need for personal space, and struggles with notions of mortality (literally—the notion of death doesn’t fit within his simplistic worldview at all). The scripts are whip-smart, the cast is cracking good, and The Tick holds up marvelously as a show that was about a decade ahead of its time.

It’s been a while since I worked in an office, so I have no idea if Dilbert is still as omnipresent as it once was. But there was a time when cubicle-dwellers passed Scott Adams’ strip around like revolutionary propaganda, plastering it across every break-room bulletin board and PowerPoint presentation in the land. So, naturally, somebody turned it into an animated TV series. With a cast of familiar voices including That Guy From The Wonder Years, That Guy from Cabin Boy, and That Lady From Suddenly Susan, Dilbert ran for two seasons on the UPN and won a Primetime Emmy before it was downsized by the network. TV vet Larry Charles (Seinfeld, Curb Your Enthusiasm, and the aforementioned Tick, to name a few credits) served as an executive producer on the ’toon, and it’s a very faithful adaptation of the comic strip, from the art style down to the bleak humor. The show has fallen somewhat into obscurity in the intervening years, but it’s definitely worth watching if you grok Adams’ sense of humor.

7) All in the Family

Crackle has several classic older sitcoms available, but the most exciting of the lot is All in the Family. Developed by TV legend Norman Lear, based on a British series called Till Death Us Do Part, All in the Family followed the lives of the Bunker family for nine seasons between 1971 and 1978. Actors Carroll O’Connor and Jean Stapleton won a shelf-full of Emmys for their portrayals of Archie Bunker, a bigoted, blue-collar WWII vet with a loud mouth and a short temper, and his innocent, sweet-natured wife, Edith. The show had a huge cultural impact thanks to its courage in addressing things most ad-hungry shows wouldn’t touch with a 10-foot pole, from Archie’s racism to homosexuality, the women’s lib movement, religion, rape, abortion, and the war in Vietnam. Unfortunately, Crackle only has the first two seasons of the show available at the moment, but hopefully more will cycle in in the near future.

With the Ghostbusters franchise about to stage a big-screen resurrection next year, now’s the perfect time to revisit the original. But as a child of the ’80s, the Real Ghostbusters animated series was as much a part of my formative Ghostbusters experience as the movie itself, so it was a wonderful surprise to find it included in Crackle’s collection. Running from 1986 to 1991, The Real Ghostbusters followed the continuing adventures of Venkman, Egon, Ray, and Winston as they attempt to keep the Big Apple free of bothersome spirits. While none of the movie cast voices his animated incarnation, voice actors Lorenzo Music, Maurice LaMarche, Frank Welker, and Arsenio Hall all do their big-screen brethren proud. The writing staff included a young J. Michael Straczynski, who would go on to give us such shows as Babylon 5 and Sense8, and the episodes were surprisingly dark, funny, and frightening for Saturday-morning TV. Crackle only has the first two seasons, but those include the show’s best episodes, before a more kid-friendly revamp changed the title to Slimer! and the Real Ghostbusters beginning with season 3.

Photo via JKeyhoe_Photos (CC BY 2.0) | Remix by Jason Reed