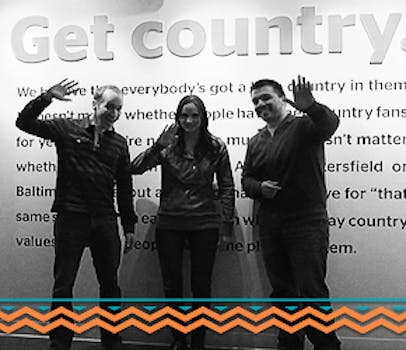 At the bar with Country Music Television’s social media team

Part of promoting Country Music Television is hanging out with the fans... and that means hitting Nashville's honky-tonks!

On the sidewalks of Nashville’s bustling Broadway Street, fluorescent lights of guitars and pigs shine bright while two drunk middle aged men push each other around in anger. Inside the Paradise Park, a local band plays a cover of Rascal Flatts’ Life is a Highway to more than two dozen thirsty patrons Sunday evening.

“Sign my sweatshirt,” said Clark Moser, a portly tourist with a large smile on his face and a Sharpie marker in his hand.

“Because we’re in Nashville,” Clark said.

This is a typical experience for a member of CMT’s social media team: days spent interacting with fans on Facebook and Twitter and nights actually socializing at Nashville honky-tonks, music venues, and restaurants. This personal touch has helped separate CMT from its bigger brothers and sisters at Viacom, MTV, BET, and VH1. And the network has done so with a team of just three.

“[It’s important] to talk to them like we’re their friends,” Monson told the Daily Dot during a visit on its road trip to South By Southwest with Tumblr-based artists Mr. GIF. “We’re an entertainment channel. We want to entertain them and keep it casual and speak in their language and respond to as many people as we can.”

An average day for the CMT social media team involves them tweeting about 20 messages a day to the network’s more than 400,000 followers and sharing about six posts a day with its 1 million fans on Facebook. Like its Viacom brethren, CMT has received its fair share of criticism for its shift from playing music videos regularly to producing TV shows. Monson and the rest of the team—Chris Nelson, director of social media, and Jennifer Morrison, music strategist—take it in stride and try to encourage fans to watch videos online.

The team is currently gearing up for the launch of Dog and Beth: On The Hunt, the latest series starring famed bounty hunter Duane “Dog” Chapman as he travels around the country to aid other bondsmen in busts.

“Dog is great on social media,” Nelson added. “He’s got a huge Twitter following [340,000 followers] and you wouldn’t necessarily expect it, but he will live tweet a show.”

CMT’s team is branching out into Vine and Google+, where it has more than 85,000 followers. They are also playing with GIF animations.

“CMT is all about developing content, and for us, it’s about social content people are familiar with,” Nelson said.