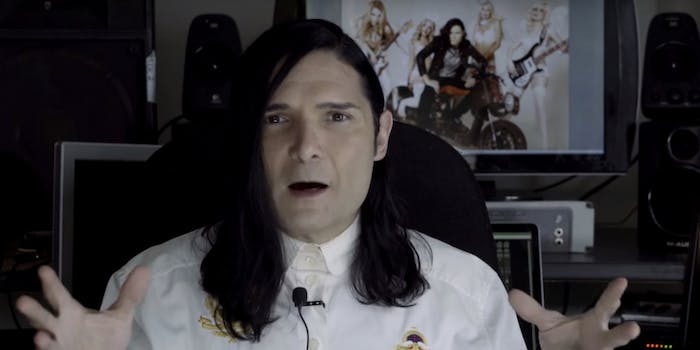 Corey Feldman is crowdfunding his album, which is ‘literally a sound of the ages’

'The songs are catchy, but do U have 2 sing them?'

You might not have known that Corey Feldman has been working on an album for 10 years, but thanks to a new Indiegogo campaign, you do now.

And you know a lot about it, because the actor and musician, known for his roles in Lost Boys and Goonies, goes very in depth in the pitch to fund $105,000 for his 22-song double album, Angelic 2 the Core. As the A.V. Club suggests, this could be Feldman’s version of Chinese Democracy, which is a sentence no one could have predicted.

What will it sound like? As he says in the explainer video, “It’s literally a sound of the ages.”

Feldman further explains that the music industry just won’t take him seriously. “I was never told ‘The music stinks’ or ‘I just don’t hear it,’ as typical turn downs from major labels go,” he writes. “No! Instead I got lots of weird excuses like ‘The songs are catchy, but do U have 2 sing them’? or ‘Not bad 4 an actor, but we don’t feel U will have the time 2 dedicate 2 a music career.'”

He’s first reaching out to his #FeldFam, which inhabits Twitter and apparently guards his reputation with ferocity. Adding to the dramatic tension, there are allegedly impostor Corey Feldman accounts trolling him, which he addressed earlier this week.

Feldman’s had his share of struggles getting his music to the people. Last summer, after a performance at a minor league baseball game in Pennsylvania, the team actually issued a statement apologizing for the quality of the appearance. The artistic vision of his music videos has been questioned. The Corey Feldman party economy has been explored.

Feldman uses different metrics to illustrate his success: “I know from the track record I’m on my way 2 breaking into the Billboard charts, I BELIEVE with the right backing and financial support I have got what it takes 2 get my 1st official Billboard hit,” he writes.

As of Friday afternoon, the campaign has raised more than $2,300.