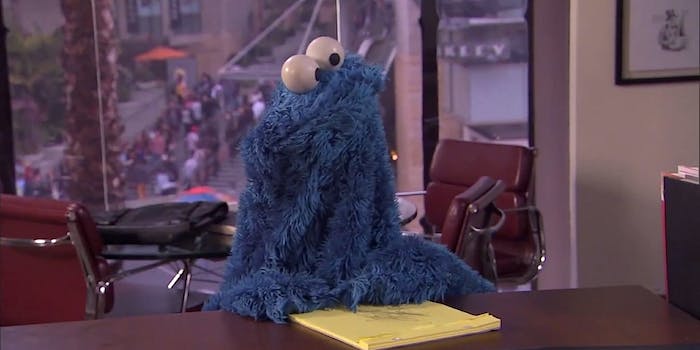 Stop him if you've heard this one before.

Cookie Monster is a creature of many trades. He’s a newsmonster, a wizard, a Jedi Knight, and even a parody master. But when it comes to writing jokes, he sticks to what he knows, leaving a very limited selection.

Jimmy Kimmel originally brought Cookie Monster onto his joke-writing staff because he was such a fan of the monster’s work. All Kimmel wanted was some topical jokes about Facebook, but in hiring the monster, the late-night host bit off a lot more than he could chew.

It wasn’t easy for Cookie Monster either. He faced restrictions on his joke writing, and no sensible monster can work in those conditions. It’s blasphemy!

Cookie Monster’s next job at Jimmy Kimmel Live, however, is a lot more suitable for him.