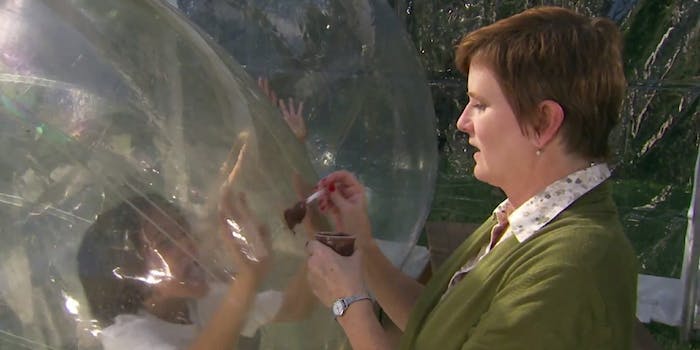 It's a bit unorthodox.

As the debate about vaccinating your children rages and the measles outbreak spreads across parts of the country, a key question remains: whether those who haven’t been vaccinated should be banned from schools or daycare centers in order to protect those who can’t get those shots yet.

Whatever solutions go into effect are bound to be controversial, but Conan O’Brien thought of the best alternative. Why ban the unvaccinated children from attending schools or daycares? Those institutions should be inclusive, but not at the risk of further spreading the disease. Conan’s solution: Kind Hearts Daycare, which looks like something straight out of a futuristic film, or perhaps a remake of Bubble Boy.

There, everyone wins—at least until some of the free-ranging kids get the idea to share a bubble or poke a hole in one of them, because if nothing else, kids can be both curious and cruel. But we’re sure Conan has a solution for emergencies like that, too.