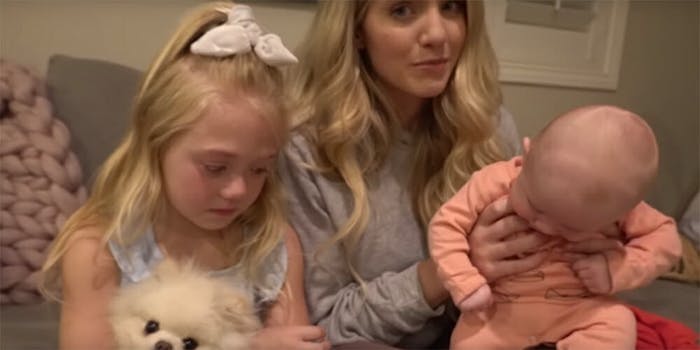 YouTube stars Cole and Savannah LaBrant upset their 6-year-old daughter—and many other people on the internet—after pretending they planned to give away the family’s puppy for an April Fools’ prank.

Known to the vlogging community as Cole and Sav, the parents run the LaBront Fam YouTube channel plus Instagram accounts for 6-year-old Everleigh, 3-month-old Posie, and the family’s puppy, Carl.

A video uploaded for the YouTube channel’s 8.7 million subscribers on Monday was called “We Have to Give Our Puppy Away… Saying Goodbye Forever :(.”

The vlog shows the family going about their normal routines until Everleigh is seen facedown on the couch, crying over the news that they’re “giving Carl away to somebody else.”

“We feel like we can’t take good enough care of him at our house,” Sav says to the camera as a red-faced Everleigh sniffles beside her. “I feel like we’re always gone, always filming or out and about … We’re always just busy doing stuff.”

But a couple minutes later, Sav leans down to Everleigh and whispers, “April Fools’!” She starts to cry again. Cole says that “at least it is going to make Ev super love Carl now,” and the second half of the video shows Everleigh playing a revenge prank.

At the end, Sav assures viewers that Everleigh is “OK.”

“She cried for like two minutes and she’s the happiest kid ever now, we prank each other all the time,” she said.

But many people on social media were furious over the prank, saying it’s traumatizing for the young girl. Criticisms poured in on Twitter and Instagram, and comments have been disabled on the YouTube video.

They also traumatized a young child by saying their giving him away. She was in tears and all sav and Cole did was laugh and ask why she was crying. She was crying because she thought they would take her dog away. 2/2

However, the prank on Everleigh was over the line.

And they should've stopped as soon as she was that visibly upset over giving her dog away. pic.twitter.com/pTQ8zYr5I7

Last August, the LaBronts were accused of lying in a vlog about being forced to evacuate their home due to California’s wildfires.