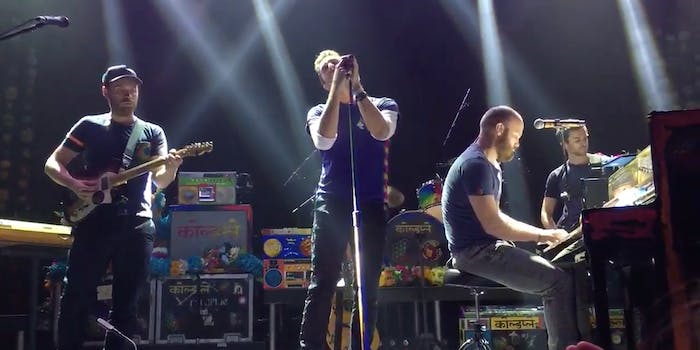 A brief history of ‘Imagine’ covers spurred by tragedy

Coldplay is far from the first to turn to the song in troubling times.

Coldplay canceled a scheduled Tidal livestream concert in Los Angeles Friday night in the wake of the Paris attacks, but they performed a touching cover of “Imagine” for the crowd who still showed up.

“I don’t know how to put a day like today into perspective,” Chris Martin said. “I’m sure you all know what’s happened and why we’ve postponed the big show that we were gonna do for you all.”

Because the cancellation came so close to the concert, Coldplay decided to play a few mellow songs anyway. They had a few moments of silence before launching right into “Imagine.”

Coldplay is far from the first band to cover “Imagine” following a tragedy. A crowd in Paris performed it following the attacks on Charlie Hebdo back in January, and just a day after Coldplay’s performance a musician brought his piano outside the Bataclan to play “Imagine” for the crowd in mourning.

But the song, which has been covered by more than 160 artists ever since John Lennon first released it in 1971, has long been a source of comfort to those coping with tragedy or troubling times.

Queen played the track in Wembley Stadium just one day after John Lennon’s murder on Dec. 9, 1980 as a tribute to Lennon.

Patti LaBelle was part of Live Aid, a dual-venue show on July 13, 1985 that aimed to raise awareness for the Ethiopia famine. She covered “Imagine” in her iconic voice during her six-song set in Wembley Stadium.

The four major American broadcast networks (ABC, CBS, NBC, and Fox) came together to put on America: A Tribute to Heroes, a benefit concert and telethon that aired 10 days after 9/11 and featured dozens of musicians and celebrities on hand to perform and man the phones. Neil Young was one of them, taking on the classic Lennon hit.

“Imagine” made another appearance at a benefit concert, this time courtesy of Madonna at Tsunami Aid: A Concert of Hope on Jan. 15, 2005.

Madonna performed in in Stockholm, Sweden one day after the Paris attacks, acknowledging how difficult it was for her to get through the show before she sang an acoustic version of “Like a Prayer.”

“It’s been really hard, actually to get through the show because in many ways, I feel, I feel torn,” she told the crowd. “Like, why am I up here dancing and having fun when people are crying over the loss of their loved ones? However, that is exactly what these people want to do. They want to shut us up. They want to silence us. And we won’t let them.”