The 7 best theories for how ‘The Colbert Report’ will end

The last episode of the Report airs Dec. 18, but how will he go?

“Of course, the biggest question of all remains: How will my final broadcast close?”

Stephen Colbert himself posed this conundrum on the Oct. 13 episode of The Colbert Report when he finally told the Colbert Nation that his final show would air Dec. 18. It’s something people had wondered ever since CBS announced in April that he would be taking over David Letterman’s job as the next host of The Late Show—although if you take it from Colbert’s character, the right-wing satirical persona he’s portrayed on the show for the past nine years, it’s because “it’s become clear to me that I’ve won television.”

With its host ever the type to put on a spectacle (remember his “Get Lucky” music video?), that final episode’s probably going to be nuts. We’re saying goodbye to Colbert the character, but not Colbert the person (or, as he’s quick to point out, Americone Dream)—and Colbert the person is still pretty awesome. Maybe he’ll even attempt putting on a regular show before he sails east down 54th Street and down Broadway to the Ed Sullivan Theater?

“I don’t know,” he said in regards to his character’s fate, according to a redditor who attended a recent taping. “I hope he’ll be OK.”

But how’s he gonna do it? The only people who truly know that right now are probably Colbert and his writers, but that doesn’t mean we can’t try to guess. It’s been something I’ve mulled over a little bit ever since I went to see a taping of The Colbert Report in late September with a friend. It’s like asking someone how a long-running drama will end, only this is a satirical news show with a real character heading it—and without the fervor of Serial conspiracy theories that have taken over the Internet as of late. While we’ve seen talk shows end in lavish fashion in the Internet age, they haven’t really involved saying goodbye to a beloved character, so we might be in uncharted territory.

For example, wouldn’t it be awesome to see Colbert (who’s probably one of the biggest Lord of the Rings fans alive) emulate Frodo Baggins at the end of The Return of the King—no longer fitting in or finding joy in simpler pleasures now that he defeated television—only to be led into the West by someone like Jon Stewart, Letterman, or even Gandalf himself? (It’s a theory that’s only just popped into my head, but don’t you really want that to happen now?)

Seriously, it could be anything.

We’ve rounded up some of the more popular Internet conspiracy theories, but no matter what he ends up pulling out from under his desk, he’s bound to have the final Word.

1) The Colbert character will die

Drastic and heavy-handed? Sure, but it’s by far the one that makes most sense. Colbert himself has said that his character won’t appear on The Late Show, but he could shout himself blue and some people will still hold out hope that the pundit could pop up at some point.

What better way to put an end to that talk by putting a few literal nails in that coffin?

On the surface, this is the ending that Colbert and his writing staff are heavily foreshadowing. Even before the host had announced his final show, Kevin Spacey made a surprise appearance in-character as Frank Underwood and suggested that Colbert “take the last train down, I’ll meet you on the edge of the platform.” House of Cards fans know how well that went for one character last season.

And when Colbert made his announcement on Oct. 13, we were introduced to a foreboding, now-recurring character: Grimmy. He looks like a Grim Reaper, and in his first appearance, he flipped an hourglass over and showed the number 32 with a skull and crossbones. Character Colbert, naturally, plays oblivious. 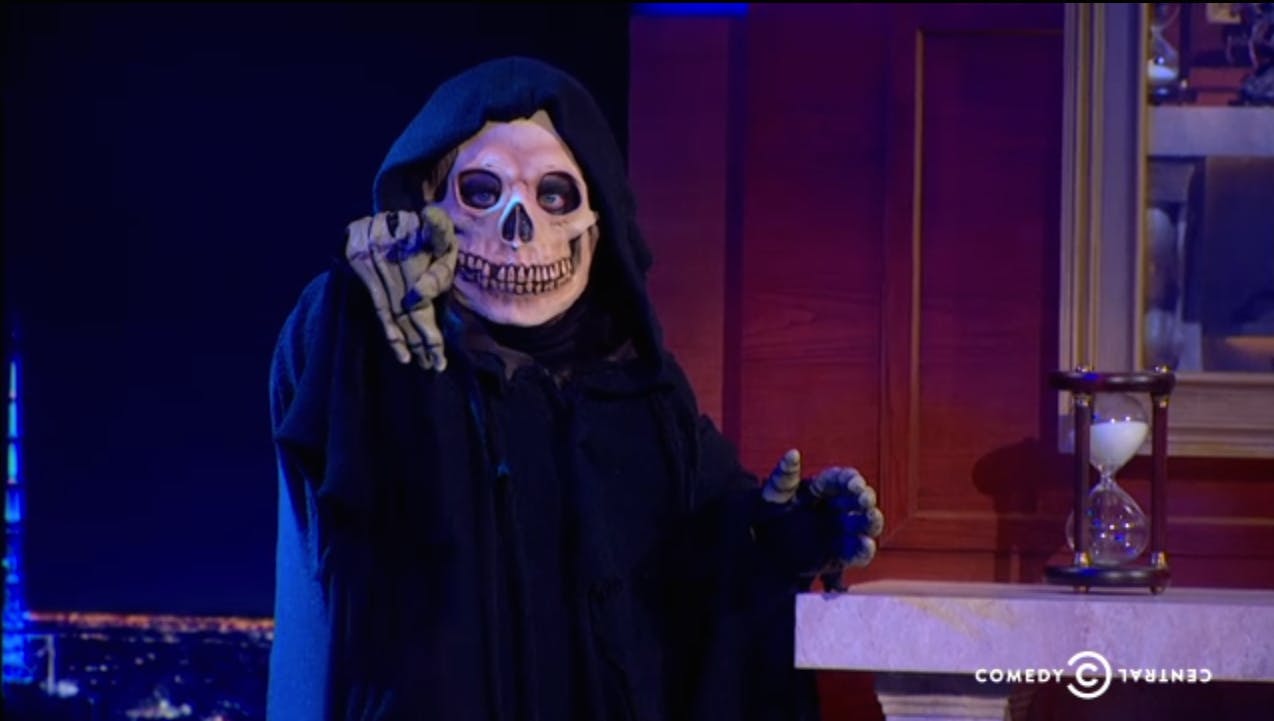 Just two weeks later, Colbert mentioned that he might go on vacation after the show ends, and who better to get suggestions than from his travel agent Grimmy. Grimmy’s top pick? Somewhere warm and with horns. Hmmm.

The main thing that Colbert conspiracy theorists can’t pin down is how it’s gonna happen. 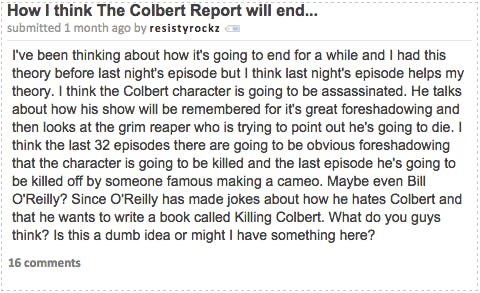 One person has suggested that Bill O’Reilly, who’s often mocked on the show, will do it. Another put out the idea that a bear, the “godless killing machines” who’ve long topped Colbert’s ThreatDown lists, will ultimately deliver the final blow. Still another person has theorized that Grimmy could be Larry Wilmore, host of The Nightly Show, already poised to takeover Colbert’s timeslot next month, in disguise.

However, the elaborate setup may end up being a ruse after all. During the Aug. 6 episode of The Colbert Report, Colbert seemed to squelch the very idea that his character would die after the show ends, which he does out of character.

“We are working on that right now, actually,” he told the audience. “We have lots of ideas, but I can tell you for sure, he will live on. Don’t worry… he’s not going to die.”

Could he be pulling our leg? Who knows?

2) He’ll be played off by Ben Folds

Colbert knew how he wanted to end the show years ago—even before CBS wanted to bring him in to replace Letterman. In an out-of-character Q&A session at the 2011 Montclair Film Festival, he revealed how he would ideally like it to end.

The song Colbert was referring to? “Best Imitation of Myself,” and he charmed the audience by performing an a cappella cover of it. The following year, Colbert told Fresh Air’s Terry Gross about his love for the song and originally thought “he had written it for me.” He ended up having Ben Folds Five on in October 2012.

How possible is it for Folds to show up? He has a concert in Melbourne on Dec. 19, the day after Colbert’s final show, but with the 16-hour time difference, by the time Colbert will presumably tape his final show (which usually happens around 7:30pm ET), it’ll be almost noon on Dec. 19 in Melbourne. To show up on that final day and go back to Melbourne in time for a concert is impossible excluding any secret twin theories.

But Folds does have a 10-day gap from the previous concert in Hobart to Melbourne. He could, hypothetically, travel to New York and shoot something in secret.

Or, as Third Beat speculated a while back, the performance might have already been taped and saved for just this occasion.

Colbert has been the subject of many fake scandals over the years (and one very real one), and he’s been the subject of ire to many Gamergate supporters ever since he interviewed Anita Sarkeesian and tackled Gamergate on his show. It might have even gotten some to believe that Colbert’s last show was a result of of having Sarkeesian on his show. It’s not.

A fake scandal would be more in tune with the character’s tone, and knowing Colbert, whatever gets him out of the way (and into obscurity) is bound to be bonkers.

“Creating a storyline (or a “game” in improv/Report terms) that stays open-ended when the Report is done, and causes or explains ‘Stephen’s’ removal from the air, is a perfect way to create that division,” Sharilyn Johnson wrote at Third Beat Magazine.

4) His character will run off with Charlene

Colbert is happily married in real life, but before his conservative persona became a newsman, he was apparently the lead singer of an ’80s-style band called Stephen and the Colberts. And on the Feb. 9, 2006, show, Colbert showed his audience a music video dedicated to a very special girl in his life.

“I think it would be funny if the famed Charlene (could make it a big name celebrity whose ‘nickname’ would be Charlene) made an appearance and finally took Stephen back,” cone3663 wrote on Reddit.

Years apart (and a possible high-profile next move for the character) may have worn away some of the hard feelings, but it’s entirely possible that Charlene still has that restraining order against him.

Some fans are taking a leaf out of Colbert’s book when trying to guess how the show will end. Colbert loves America, so naturally they think it’ll be damn patriotic. 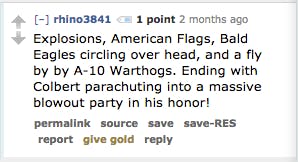 Absurd? Completely. But we wouldn’t put anything past Colbert at this point.

6) He’ll just mash up every other TV series finale

Colbert said it best on Oct. 13 as his character spun around some possible theories on how the show will end. And wouldn’t it be surprising if the ending was right under our noses the entire time?

“Will I wake up next to Suzanne Pleshette in a snow globe, after Rachel gets off a plane to be with me, while BJ Honeycutt writes out ‘Goodbye’ in rocks until we cut to black in the middle of a Journey song?” he pondered. “Or will I get sued for copyright infringement?”

As unlikely as it may be, I could see someone like Jimmy Fallon ending his tenure on The Tonight Show like this in a number of years.

7) The last nine years were a dream

It might’ve worked for St. Elsewhere and Newhart, but ending a series, one that many were invested in, by suggesting it was a dream will cause wrath in the fandom. It’d be pretty hard to write around the real-world headlines Colbert’s character has made (just look at his turn at hosting the White House Press Correspondents’ Dinner and the Rally to Restore Sanity and/or Fear), but it would explain how Colbert became, well, Colbert. Logistically, it might be even more polarizing than even those series finales past.

…That LOTR ending isn’t looking so ridiculous now, is it?