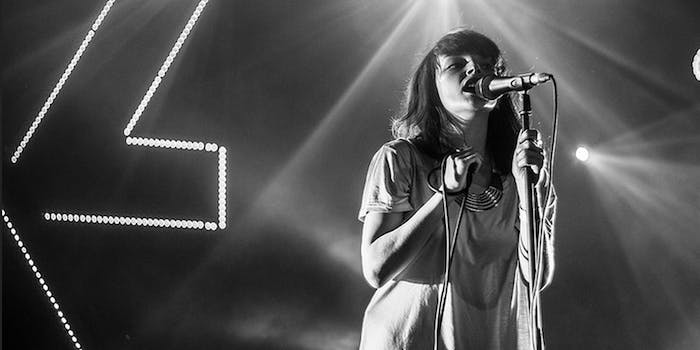 Lauren Mayberry might be the lead singer of popular indie rock band Chvrches, but that hasn’t made her immune from the types of threats that women on the Internet get all the time.

Mayberry has been vocal about the types of threats she gets online as a result of being in the public eye, and on Wednesday she shared one of the particularly brutal ones on Instagram.

My band is lucky enough to have some of the most awesome, supportive and respectful fans in the world and we are so excited to be in the studio making an album to share with them. Yet, on a daily basis, we still receive communications like this. These people never learn that violence against women is unacceptable. But they also never learn that women will not be shamed and silenced and made to disappear. I am not going anywhere. So bring it on, motherfuckers. Let’s see who blinks first.

She also shared it on Twitter, reiterating the message and showing she wasn’t afraid to stand up against the faceless person.

This isn’t the first time she publicly shared inappropriate correspondence to show what types of messages she routinely receives. A Facebook post from 2013 shows one of the more “polite” messages.

In a post on the Guardian that year, she explained the reactions to the post and wrote about what it’s like to be in a band that “was born on the internet.”

After making the post, I sat back and watched with an increasingly open mouth as more and more people commented on the statement. At the time of writing, Facebook stats tell me that the post had reached 581,376 people, over five times the number of people who subscribe to the page itself, with almost 1,000 comments underneath the image. Comments range from the disgusted and supportive to the offensively vile. My current favourites from the latter category include:

“It’s just one of those things you’ll need to learn to deal with. If you’re easily offended, then maybe the music industry isn’t for you”

But unlike her first negative experience with online feedback, this time around Twitter users and fans have been overwhelmingly supportive of the 27-year-old singer. Most are in disbelief that a person could possibly write such a thing.

If you use the Internet every day, it’s sadly not that hard to believe.