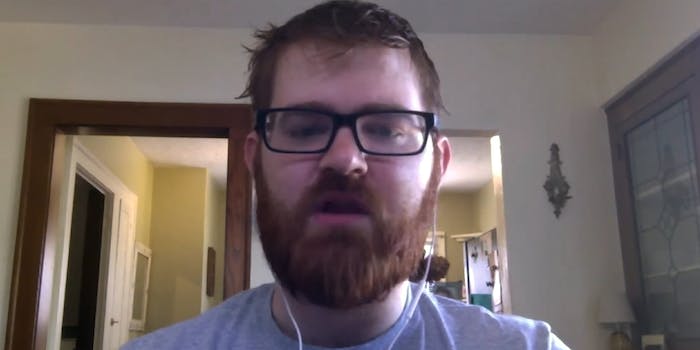 Rep. Andy Harris (R-Md.) confirmed that he met with Johnson, but said that he was “unaware” of Johnson’s past, which includes joking about Holocaust denial and fundraising for white supremacy websites. Harris said the meeting surrounded Johnson’s “business with genetic sequencing,” in a statement to Talking Points Memo.

In another statement, first obtained by the Daily Beast, Rep. Phil Roe (R-Tenn.) said that the meeting was about “increasing the number of sequenced genomes for research.”

Both responses are vague enough. But a look into Johnson’s past shows he does have one fascination with genes, and particularly racist beliefs that genetics make Black people more disposed to violence.

On an episode of The Joe Rogan Podcast in August 2015, Johnson and Rogan discuss African-Americans, and Johnson dives into how he believes Black people are genetically hardwired for violence, and how white people had a gene diminished because they adopted “farming” after “getting out of Africa.”

“There’s been a lot of discussion like is this innate, is this like just something we have to deal with,” Johnson said about Black on white crime. “Like there’s this whole debate about the MAOA gene, which is like this gene that Black Americans, Black Africans have, it’s like a proclivity to violence they have.”

Johnson goes on to say that Europeans and Asians don’t carry the gene because “farming” helped bred it out of them.

“It’s like a big debate. If you think about White European, Asian ancestors, as we kind of moved out of Africa, aggression and violence was kind of less necessary because we were farmers and stuff,” Johnson told Rogan.

The gene that Johnson references, MAOA gene, makes an enzyme called monoamine oxidase that, according to the National Institute of Health (NIH), breaks down neurotransmitters like “serotonin, epinephrine, norepinephrine, and dopamine.” According to the NIH, “MAOA gene activity may also be associated with aggression. The roles of MAOA-uVNTR and other polymorphisms are also being studied in depression, bipolar disorder, alcoholism, drug addiction, and many other conditions.”

However, a search for “MAOA gene race” pulls up sites like thealternatehypothesis.org that make racist speculations on links between MAOA and race.

Both Roe and Harris denied in statements to the Daily Dot that their discussions with Johnson involved race. Harris said that he and Johnson did not discuss “genetics in the context of race.” But neither congressmen would identify what company Johnson said he represented.

In a longer statement, Roe’s office said none of Johnson’s beliefs were alluded to in the meeting: “Mr. Johnson indicated that he had a company that is working on genomic sequencing, and he advocated for more publicly-available sequenced genomes. The meeting lasted less than 10 minutes, and there were no additional takeaways or promises for further action. To reiterate, Congressman Roe would not have taken the meeting had he been aware of Mr. Johnson’s previously expressed views—which he believes are abhorrent, were not alluded to in the meeting, and were not readily discoverable when Congressman Roe’s staff looked into the name “Charles Johnson,” which is how he was presented.”

However, it’s not clear why they would have taken the meeting. Google searches for Johnson and DNA and/or genetics reveal a Reddit discussion about his comments on the Rogan podcast.. But, no company that sequences genomes can be found by searching for Johnson’s name and genetics. Johnson did not respond to an email about what company he represents.

However, a Charles D. Johnson, who is the director of genomics and bioinformatics at Texas A&M, does appear at the top of Google for “Charles Johnson genetics.”

Maybe they thought they were meeting with them.