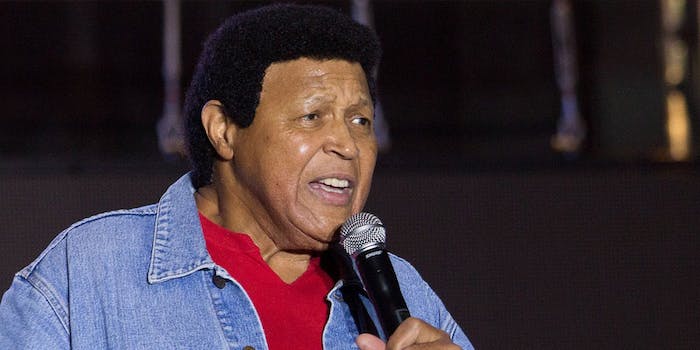 By far the most contentious legal battle over a penis-measuring app to date.

Quick: What would you call a webOS app that measured how big your erect penis was? If you answered “the Chubby Checker,” you’re correct. (You’re also kind of a pervert, tbh). But there’s one person who isn’t happy about that: Checker himself, who just settled a lawsuit with Hewlett-Packard and Palm, claiming that the penis-measuring app “adversely affects Chubby Checker’s brand and value.”

According to the Hollywood Reporter, Chubby Checker (nee Ernest Evans) sued HP last year for trademark infringement when the app, which allowed users to estimate their penis size by entering their shoe size, first came out.

In response, Hewlett Packard claimed the Chubby Checker was designed and named by a third party, and the company didn’t bear any liability for merely hosting it on their app store. They also claimed they removed the app from their store as soon as Checker complained, months before the lawsuit was filed.

Apparently, however, this story has ended just as well as any penis-measuring app trademark dispute could have: The two parties have settled out of court, with Hewlett Packard agreeing not to use any of Checker’s established trademarks. (The terms of the settlement have not been revealed, as is often the case with these types of high-profile legal disputes).

So now that Checker and HP have reached something of a detente, what can we learn from this dispute? Well, A) That Checker, the artist behind the 1960 hit “The Twist,” is actually still alive—he is, and looking better at 72 than I do at 25, I’d say—and B) That HP could’ve saved themselves a great deal of money and legal headaches if they’d just named the app the “Willie Nelson” and called it a day.