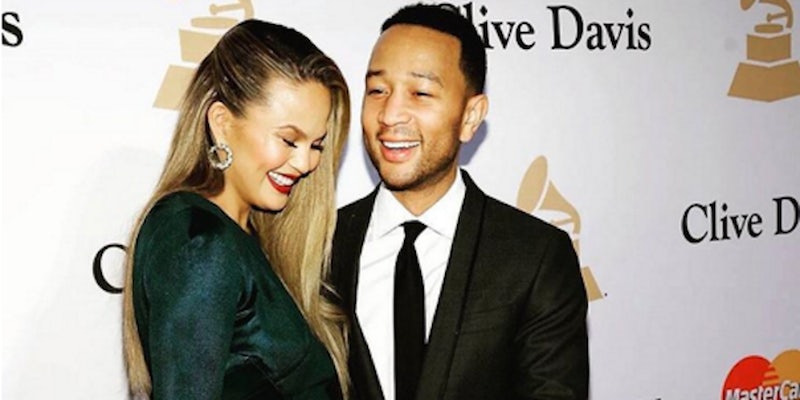 'I said it so casually because I'm just open.'

Chrissy Teigen may be a supermodel, cookbook author, and funny tweeter, but there are people out there who still think she could be doing more. Specifically in the fertility department.

In a recent interview with People, Teigen opened up about her experience using in vitro fertilization in order to get pregnant with husband John Legend. In vitro is a fertility option that involves inseminating eggs outside of the body in order to ensure they’re actually fertilized before a doctor surgically places them into the uterus. The treatment can be very emotional for many patients, since even fertilized eggs aren’t guaranteed to result in a pregnancy once they’re implanted, but for Teigen the story ended happily.

To People, she described the joy of ending up with more than one fertilized egg to choose from, and told the magazine she ultimately implanted the one with a female embryo because she thinks Legend would be “the best father to a little girl.” That’s where the Twitter outrage starts.

A now-deleted tweet from a fan reprimanded Teigen, warning her that choosing an embryo based on its gender was messing around with a “natural blessing from god.”

But Teigen didn’t take the criticism on this sensitive subject lying down. In her typical fashion, she fired back:

my natural blessing from god was infertility. https://t.co/OtGJkZ0nA9

What year is this!? And for the record, I am always happy and open to speak on infertility. The more casual, the better! I don't mind.

I also picked the embryo with a taste for bacon, a knack for magic and size 7 feet so she can always find shoes

what is that difference though? i've already created embryos with a doctor. only after must it be random? https://t.co/hyIwy3P1Oy

This is all so interesting. I said it so casually because i'm just open. I'm around so many open-minded people & forgot it's controversial.

anyhow I am not mad at anyone's beliefs but I don't really actively seek out people to make them feel bad about their decisions either.

Between these tweets and her support of #FreeTheNipple and stretch mark pride, it’s safe to say Teigen isn’t going to let anyone feel bad about her body any time soon.