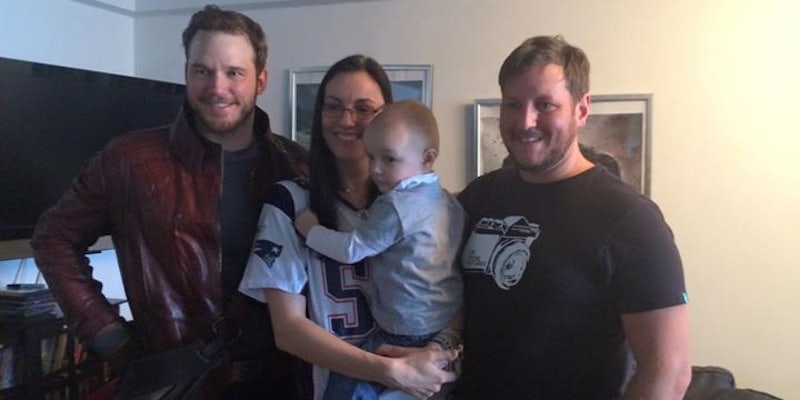 Star-Lord took a break from guarding the galaxy to greet some kids.

For weeks, the Internet has been gripped with excitement as it watched celebrity BFFs Chris Evans and Chris Pratt get serious about sports. What began as friendly football trash talk on Twitter soon turned into an all out Super Bowl bet with heroic stakes.

If Pratt’s Seahawks won, Evans vowed to don his Captain America costume and make the rounds at Seattle Children’s Hospital. If Evans’ Patriots took home the Vince Lombardi Trophy, Pratt pledged to transform into Star-Lord and spread some smiles at Christopher’s Haven in Boston.

With stakes this high, there was no way these Chrises could simply watch the game from the comfort of a couch, so the twosome ventured out to Phoenix, Ariz., to take in the Super Bowl in person. The duo even posed for a few photos during the game, showing that no matter the victor, there would be no hard feelings between these besties.

But when it comes to making good on a wager, the Star-Lord wastes no time. Though the final minutes of the game saw victory slip from the Seahawks’ fingers, Pratt was all smiles on Friday morning when he arrived at Christopher’s Haven in full Guardians of the Galaxy regalia. While he didn’t sport a Tom Brady jersey as promised, the actor served up plenty of smiles while posing alongside kids and families decked out in their Patriots best.

This is as close to an 'AVENGERS' and 'GUARDIANS OF THE GALAXY' crossover as we'll get… for now. pic.twitter.com/yhtPxGhE3E

Not wanting to miss a chance to gloat about Malcolm Butler’s stellar interception, Evans made the rounds as well. Even though he wasn’t in costume, the Captain America actor took time to pose for pictures with pint-sized fans and sign some shields for a few brave kids.

When two epic Chrises combine their powers for good, everyone wins. Since Evans is such a good sport, the two have promised to head west and make the rounds at Seattle Children’s Hospital together.

Thank you to @prattprattpratt for being a good sport. I'll be there with you at @chris_haven, and don't worry @seattlechildren, we'll be

coming there too! And lastly, I don't think anyone can ever doubt the mental toughness of Tom Brady. Tough couple weeks, but he showed why

Although the epic #SuperHeroBowl bet is coming to a close, we’ll always have the photos and tweets to look back on fondly as we dream about this heroic friendship.