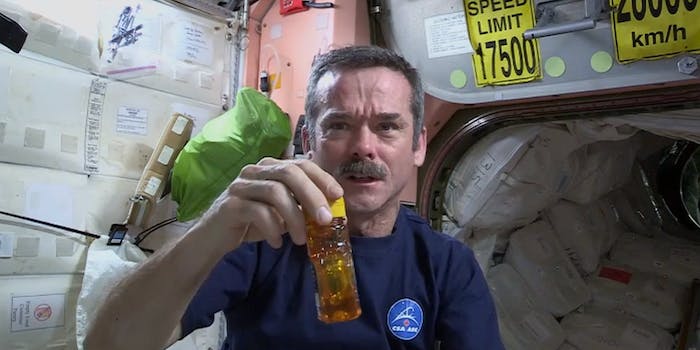 Everybody’s favorite social media-savvy astronaut shows off the kitchen at the International Space Station (with better food than in the ’60s) and demonstrates how to make a peanut butter and honey sandwich without losing anything or making crumbs.

Now that Pope Benedict XVI has resigned, the Catholic Church need to pick a new pope. Technically, the only criteria you need to achieve is to be a man and Catholic, but in reality, the process is a lot more selective. C.G.P. Grey breaks down the career path to the papacy.

Master food reviewer Daym Drops saw your comments, read your emails, and got your phone calls. He may have a problem with the box size, but they’re still damn sexy and serve as an alternate choice for the Fish sandwich.

It’s been a good year for the movies, and Oscar host Seth MacFarlane feels compelled to break out into song to compare the different nominees for this year’s ceremony—as well as the ones that fell a little short.

5) Cinema Sins, “Everything Wrong With Inception in 4 Minutes or Less”

After many requests from viewers, CinemaSins tackled Inception, a film that’s still confusing fans and viewers to this day. And even after multiple viewings, these guys still can’t make heads or tails of it through its sins.