Chris Brown is Instagramming his standoff with the LAPD

After allegedly pulling a gun on a woman early Tuesday, singer Chris Brown is in a standoff with police at his Los Angeles home.

Law enforcement has been outside Brown’s residence since since about 3am PT, according to Jezebel, waiting on a search warrant. This after an unnamed woman called the police and said Brown pulled a gun on her following an argument.

Brown has reportedly demanded a warrant from law enforcement before allowing them to enter his home. During the standoff, Brown apparently threw a duffel bag full of guns and drugs out of his window, TMZ reports.

Police have not confirmed whether Brown actually pointed a gun at the woman. Late Monday, Brown was hosting guests—including singer Ray J—when uninvited people arrived. After an alleged scuffle, a woman filed a police report saying Brown pulled a gun.

In the interim, Brown has been posting Instagram videos from his home claiming his innocence. 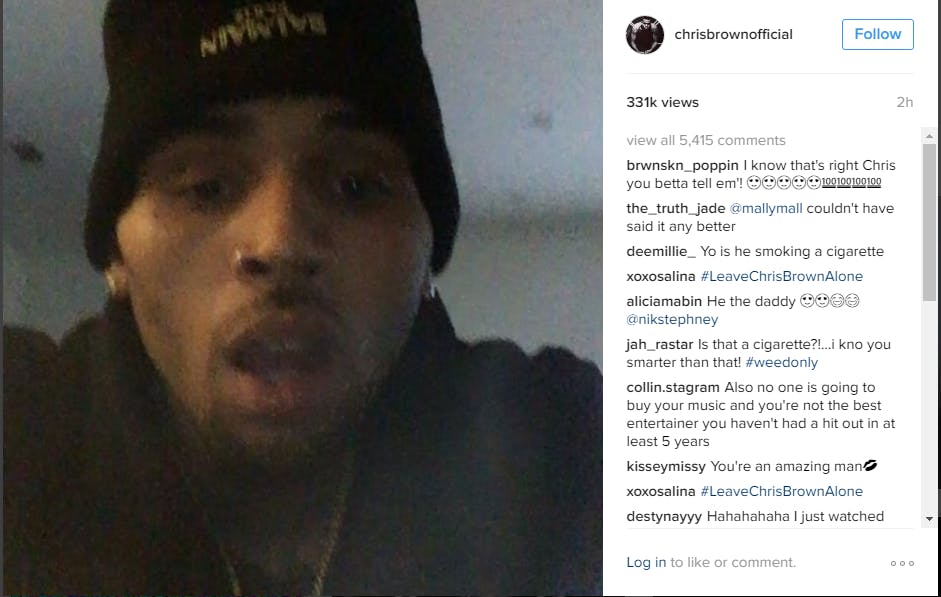 “I’m way too tired to be dealing with this bullshit,” Brown said in a video. “I’m innocent, fuck everybody.”

He’s apparently reading headlines, too, complaining about them in another clip.

“Y’all ain’t doing nothing but giving me better publicity,” Brown said. “‘Barricaded myself in my house’? Have you seen my house?… It’s always going to be fuck the police: black lives matter.”

His second video speaks directly to authorities: “Good luck, when you get the warrant or whatever you need, you can walk right up in here and you gon’ see nothing, you idiots.”

His third video is a promotional push for folks to stream his music.

TMZ reports that the woman who made the accusation has previously won a beauty pageant, though authorities have not yet revealed her identity.

You can livestream the standoff news coverage here.

Update 7:13pm CT: Brown has been arrested on suspicion of assault with a deadly weapon, according to the Associated Press.