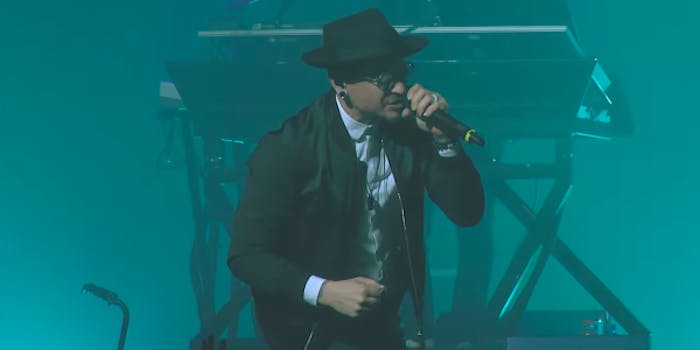 Chester Bennington memorial concert will be livestreamed on YouTube

It'll be Linkin Park's first performance since his death.

For those who couldn’t get tickets to the Chester Bennington tribute show at the Hollywood Bowl on Oct. 27, Linkin Park announced Friday that it would livestream the entire concert for free on the band’s YouTube page.

Tune in next Friday, October 27th at 7:45pm PST to watch our show in honor of @ChesterBe LIVE on @YouTube: https://t.co/nlW3hvjihq pic.twitter.com/9glBQ4g9VL

The show begins at 7:45pm PT, and it’ll be Linkin Park’s first performance since Bennington died in July. The concert is sold out, and money raised from the tickets purchased will be sent to Music for Relief’s One More Light Fund.

Among those who will be playing the show include members of Korn, System of a Down, Avenged Sevenfold, and Yellowcard.

“I had gone to [producer] Rick Rubin as a source of guidance. He had said, ‘I think you guys need to get onstage. I think that’ll be the thing that’ll feel good. It’ll be super, super hard,’” Linkin Park singer Mike Shinoda told KROQ, via Blabbermouth. “We haven’t gone out together in public, we haven’t played—we haven’t gone onstage … I know that for some of the guys in the band, getting onstage is more scary than [for] other guys in the band, but I will say that for all of us, it’s definitely the thing that we want to do. It feels like the right way to celebrate Chester.”