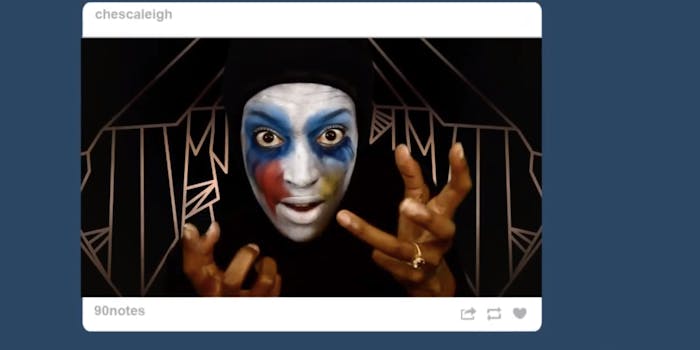 Leigh broke out on YouTube with the hilarious “S**t White Girls Say to Black Girls.”

Chesca Leigh spent 10 hours making a parody of Lady Gaga’s “Applause” for Tumblr, and what does the Tumblr community want? Reblogs!

Leigh, who broke out on YouTube with the hilarious “Shit White Girls Say to Black Girls,” regularly posts video parodies, vlogs, and beauty videos. This latest Gaga parody is spot-on and ambitious, and as one commenter claims, “a Tumblr anthem.”

In her messy painted face, Leigh sings the chorus in her best Gaga voice: “I live for your reblogs!”

Another commenter wrote, “This must have been so much work, oh my god. Looks? amazing!”

“Thank you!” Leigh replied. “Your enjoyment makes the hours of work worth it!”