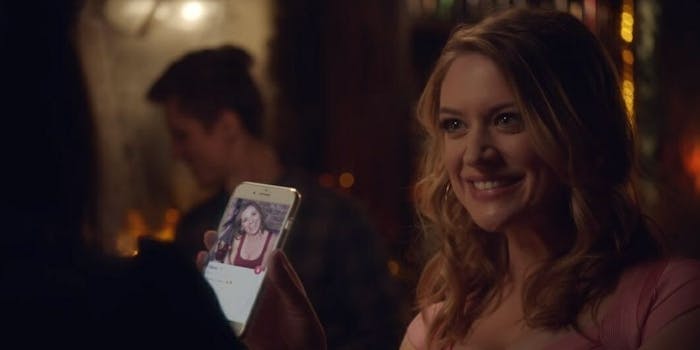 Her new show is the perfect vehicle for Frei.

Chelsea Frei remembers with great clarity one of the worst moments of her career. She was a hostess in New York City, and one of the restaurant’s biggest investors entered for brunch. Frei’s manager told her to treat the investor like a VIP.

But in the middle of the assignment, a celebrity called the restaurant to report that they had lost a jacket during a recent visit.

That put Frei in a difficult spot. The celebrity on the phone started getting angry, probably because Frei kept forgetting what the celebrity had said, and Frei was forgetful in person as well, bringing the investor’s table the lunch menu instead of the brunch menu.

“Instead of being smart and prioritizing,” Frei told the Daily Dot. “I handled both at the same time.”

She handled both poorly. But through all of her misery and dejection at work, it sparked an idea in her brain that eventually led her to here—as a co-star on the YouTube Premium series Sideswiped, which premieres July 25. Frei had studied acting at NYU, and she had performed plenty of Shakespeare. But instead of working steadily as an actress after college, she found herself trying to find a celebrity’s coat while screwing up in front of her employer’s big-time money man.

That idea germinated into a six-episode webseries called Hostess that was picked up by Funny or Die and eventually led Frei down this path, where she now has a home on YouTube. What Frei managed was to turn her misery as a hostess into the biggest step of her career.

“What definitely helped me the most was continuously making things,” Frei said. “Yes, there’s so much content online, there’s generally going to be a sketch that that has 5 million more views than yours. But what allowed us to have careers was the fact we knew exactly what we wanted. We just continuously made products. I always treated it as a 9-to-5 job. What can I do all day to better my career and my art?”

After graduating from NYU, she began writing sketches with fellow actor and comedian Noam Tomaschoff—including one called “Fuckboy Mountain” that received more than 13,000 views on Facebook. Frei later wrote that the sketch came from “my own shitty experience with a shitty person. It was honestly the best feeling I’ve ever had, better than getting a callback or even cast in a show.”

Frei is also fascinated by social media and inspired by women’s issues, so she wrote and performed in “#BlowingUp” and “Where the Fuck Are All The Tampons,” respectively.

Where the F*CK are all the Tampons?

LADIES – Ever wonder why they hide the damn tampons at CVS? You're not alone.

Then, she created Hostess.

That eventually landed her in an audition for Sideswiped. She previously had read the script for the show about a mother and her two daughters who are traversing the land of dating apps, and she said she instantly related to it. The main character Olivia, played by Carly Craig, is single, and she decides to get on Tinder and date every single person with whom she matches. In essence, that’s 252 men. Her mother, played by Rosanna Arquette, is a new widow and joins her, while Frei’s character is the sister who is experiencing the so-called seven-year itch in her marriage.

For Frei, who has studied and created sketches about social media, it’s the perfect vehicle for her.

“I became such a better and smarter actor for having created my own work,” Frei said. “Having written for myself and using that as my only outlet for a while, it was so helpful in helping me dive into a script and really understand it. It’s just such a great outlet for young, creative people. Having those different outlets is insanely helpful.”

But she also can’t help but think back to her restaurant hosting days when tracking down a celebrity’s coat was the biggest contribution she could make—when she thought she might never get here. If not for her egalitarian outlets like YouTube, perhaps she never would.