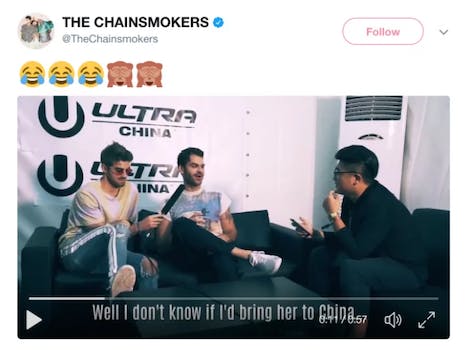 Chainsmokers under fire for tasteless dog joke in China

While promoting an appearance at Ultra China in Shanghai, Chainsmoker Alex Pall made a comment that’s drawn backlash from fans and critics. After being asked by an interviewer whether his dog comes on tour with them, Pall responds by saying she’s not well-behaved enough, but that he doesn’t know if he’d ever bring her to China.

The promotional video ended up on the group’s official Twitter early Monday morning, but has since been deleted.

Some saw this as perpetuating a stereotype about Chinese culture. Others pointed out that the controversial Yulin dog meat festival still takes place every year, despite recent rumors that it would be banned. There was an added layer of criticism because the duo just collaborated with wildly popular Korean pop group BTS, which has also seen backlash.

I don't like the chainsmokers but the yulin dog meat festival still happens every year in china.
They are still jerks for joking about it.

The Chainsmokers have not yet made an official statement.