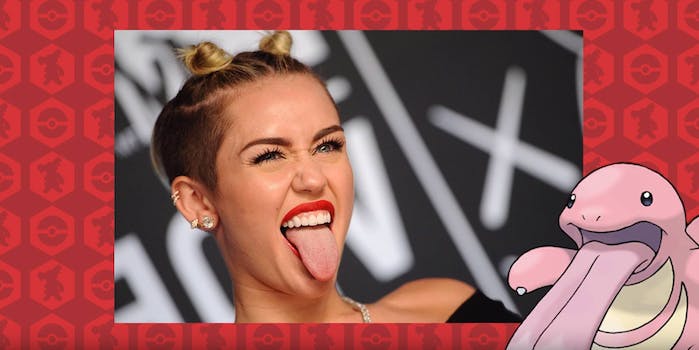 You just might run into them at a PokéStop.

Pokémon Go mania has swept the nation, calling even the most famous of fans to roam the streets and catch every last one of these things.

The release of Nintendo’s game for smartphones allows users to fulfill their dream of becoming a trainer, finding and capturing Pokémon in the real world by using the phone’s GPS system to let Pokémon “appear” in their surroundings.

With more than 7.5 million U.S. downloads and surging, it’s no surprise that celebrities who used to play the beloved game on their Nintendo Gameboys back in the day are filling up their star-studded time on the hunt.

(Miley Cyrus is a long-running Pokemon meme, but as of press time has yet to publicly support Go.)

The supermodel took to Twitter to ask her fans whether she should embark on the new journey. She soon found a new obsession.

Am I too old to catch Pokemon?

However, it didn’t last very long…

I'm over Pokemon. Please let's pretend I never played and I never bought hundreds of pounds of incense

The singer and songwriter posted an Instagram showing how much he puts into the new game, no matter what it costs.

Even famous athletes are setting aside time from practice to hang out with their favorites.

We caught a @Pokemon in free agency! #GottaCatchEmAll #PokemonGo pic.twitter.com/Ks2Em8CyeX

I know about the privacy issues wit Pokemon but fuck man. Nigga gotta catch em all.

I'm havin so much fun.

The Daily Show host is awfully defensive about how much he digs the game.

"No ma'am, I was not taking video of your child, I came to this park to catch Pokemon."#PokemonGO

The America’s Next Top Model and Dancing with the Stars winner shared his first wild Pokémon encounter with the world. Nice work.

The ex-Joe Bro exposed his secret to finding the most Pokémon, but little did he know that is cheating. You can’t have it all Kevin.

The Saved By The Bell actor and Extra host exercises his true talent as a trainer by catching a majestic Magikarp at Universal Studios.

What better way to announce his obsession than striking a sexy pose with his buddy Squirtle at the Star Trek premiere?

The budding rock star is not only playing, but actively stirring the rumor mill.

Rumor has it Mew2 is at Area 51… Road trip anyone? #PokemonGO

The Breaking Bad standout is at least in on the joke.

The only thing left is confirmation that Drake is out there somewhere trying to catch a Pikachu.

Dudes be like, "Gotta catch em all" #PokemonGO pic.twitter.com/DKEqbQlud1