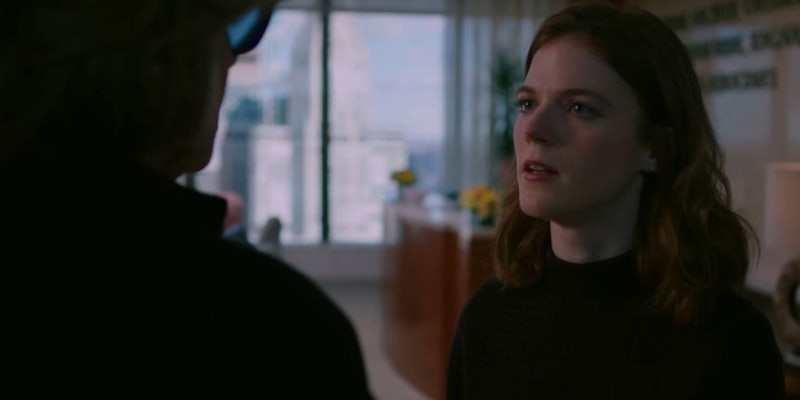 CBS’ ‘The Good Fight’ boasts a historic LGBT lead, but will anyone get to watch?

Network television got its first lesbian lead character this week when The Good Fight debuted on CBS. Too bad the series lasted precisely one episode before being banished to the internet.

A spinoff of The Good Wife, the critically acclaimed drama that ran for seven seasons, the legal procedural picks up where its predecessor left off. Diane Lockhart (Christine Baranski) elects to retire, leaving behind the law to take some time for herself and maybe write a book. But scandal throws an unexpected wrench in her plan: An old friend, Henry Rindell (Paul Guilfoyle), loses her retirement savings in a Ponzi scheme. The press labels Rindell the “next Bernie Madoff.”

Baranski is a national treasure, and it’s great to have her back on TV just months after The Good Wife turned in its briefcase. No one likes to see Mary Sunshine unemployed for long. But refreshingly, the spinoff passes the torch to a new associate.

Maia Rindell (Rose Leslie), who just started at the firm Lockhart is vacating, finds herself in a familiar situation. When her father is arrested, Maia is harassed by strangers who blame her for their misfortune. Even Diane, her godmother, can’t look Maia in the eye. It’s a pat bit of parallelism. The pilot of The Good Wife picked up after Peter Florrick (Chris Noth), the state attorney for Cook County, is accused of misusing public funds to hire prostitutes. After he is imprisoned—awaiting trial—his stay-at-home wife, Alicia (Julianna Margulies), is forced to practice law again. She initially finds it difficult to focus on her cases when everyone around her looks at her like “one of those women,” the sad spouses who stood by a cheating husband.

The pilot for The Good Fight traces a familiar path to its predecessor, but the premiere puts same-sex relationships front and center. Maia is dating a fellow lawyer, Amy (Heléne Yorke). The audience is first introduced to the couple after Maia passes the bar exam, passionately embracing her loving girlfriend in celebration.

It’s a small moment but a big milestone for television. Game of Thrones fans may recognize Leslie as Ygritte, the wildling woman whose Jon Snow diss launched a thousand memes. She’s also the first actress to ever play a lesbian protagonist on network TV. Although cable gave us The L Word, the big four networks have been slow to catch up. There are just a handful of LGBT leads on primetime TV: Kenny (Noah Galvin), a gay Catholic high school student on The Real O’Neals; and Annalise (Viola Davis), a bisexual law professor with a burning torch for her ex-girlfriend Eve (Famke Janssen).

While there are more queer people on TV than ever before, very few of them are allowed to anchor their own show. In its 2016 “Where We Are on TV” report, the media watchdog group GLAAD found that 4.8 percent of characters on broadcast shows are LGBT. This is a record for the medium, but the vast majority of these characters remain cast in supporting roles or are part of large ensembles. Notable examples include Luisa (Yara Martinez) on Jane the Virgin, and Connor (Jack Falahee) on How to Get Away with Murder.

Having Maia’s storyline at the center of The Good Fight is a critical step forward both for broadcast TV and the series itself. Executive produced by Michele and Robert King, The Good Wife was often criticized for its treatment of the show’s best character, the bisexual Kalinda Sharma (Archie Panjabi). Panjabi was the first member of the main cast to win an Emmy for her work, playing an emotionally detached private investigator with a penchant for thigh-high leather boots. As the show progressed, the writers struggled to find storylines worthy of the actress who plays her—often throwing Kalinda into bed with the nearest character. Kalinda was forced into an on-again, off-again relationship with the long-suffering Lana (Jill Flint), an FBI agent who clearly never read He’s Just Not That Into You.

After years of increasingly diminished returns, Panjabi left The Good Wife after its sixth season amid reports of a behind-the-scenes feud with Margulies, who also served as an executive producer on the show. But the more likely reason is that writers often struggle to develop meaningful queer storylines. As evidenced by fan furor over the Bury Your Gays phenomenon, in which LGBT characters are treated as expendable and killed off at the drop of a hat, this problem is not specific to The Good Wife.

While The Good Fight has the opportunity to go farther than any other show in the history of broadcast television when it comes to lesbian representation, there’s a catch: The 10-episode drama won’t be airing on TV. The program will be exclusively offered to subscribers through the CBS All-Access app, which will also stream Star Trek: Discovery later this year. That show will reportedly feature a black female lead and a gay crew member.

CBS has high hopes for All Access, which the network predicts will pull in 8 million subscribers after the platform gets a foothold in the streaming marketplace. Boasting just 1.2 million enrollees since launching in 2014, it remains to be seen if customers who may already be paying for subscriptions to Netflix will be willing to shell out additional cash for yet another service. Enticing its core demographics to watch The Good Fight may prove a particular challenge for a network that attracts the oldest audience among the big four networks. The average CBS viewer is 59.9 years old, while CW watchers are more than a decade younger.

This an audience that’s both more conservative in its politics and viewing habits, and one of the few demographics that still consumes TV as it airs. It’s likely not a coincidence that The Good Fight will be airing on a platform in that older viewers—who may be less keen on the show’s queer content—won’t watch.

That’s a shame. It’s also a reminder that when it comes to LGBT representation, streaming continues to be light-years ahead of broadcast television. If CBS is hedging its bets by quarantining its lesbian leads online, shows like Amazon’s One Mississippi, Seeso’s Take My Wife, and Netflix’s Orange Is the New Black all feature queer female protagonists in complex, nuanced relationships. Transparent, the acclaimed Amazon dramedy about a transgender woman coming out to her neurotic Southern California clan, features two generations of lesbian, bisexual, and trans women attempting to figure it all out. Nearly everyone on Transparent is queer, and that fact is treated as perfectly ordinary.

CBS needn’t worry about offending its core viewers, however, because it’s already proven that audiences are ready to embrace lesbian characters. Although critics widely hated Two and a Half Men during its improbable 12-season run, there was one part of the show that reviewers and audiences actually liked. During the sitcom’s final season, executive producer Chuck Lorre killed off Charlie Sheen’s hard-partying character, also named Charlie, following on-set tension over his frantic behavior. The actor was replaced by Amber Tamblyn (Joan of Arcadia), playing the illegitimate daughter he conceived during a tryst in a bar bathroom. Jenny is a chip off the old block, sharing her father’s taste in drugs, booze, and most especially, womanizing.

What could have been a one-note lesbian joke was surprisingly nuanced for a show that once cast Chris O’Donnell as a former girlfriend of Charlie’s just to make the character squirm at the very idea of transgender men. Slate’s June Thomas remarked that Tamblyn’s addition to the cast transformed Two and a Half Men from one of the crassest, most misogynistic shows on TV to one that was surprisingly sex positive. Jenny is a player who hooks up without apology, open and honest about her sexual appetites. After hooking up with a pizza delivery girl, Jenny remarks she didn’t leave a tip because her lover “didn’t come in 30 minutes.”

Rather than running for the hills, viewers quickly responded to the character. Although Tamblyn was only supposed to guest on Two and a Half Men for a five-episode arc—a quick ratings boost for a comedy on its last legs—the producers quickly updated her to a regular. If only they’d given Jenny her own show.

The Good Fight will, of course, be a very different show than Two and a Half Men. Like its predecessor, the procedural is a cynical, fast-paced look at the cutthroat world of Chicago law firms. During the premiere, Lockhart’s partners refuse to welcome her back to her own firm after she loses her entire life savings, all but leaving her out in the cold. But if The Good Fight hopes to reach the dizzying highs of its forebear, it should embrace the very qualities that make it stand out in the TV landscape.

CBS aired the first episode of The Good Fight on television in hopes that its viewers will make the switch to digital. If the network wants to do right by queer audiences, it should broadcast the other nine episodes, too.