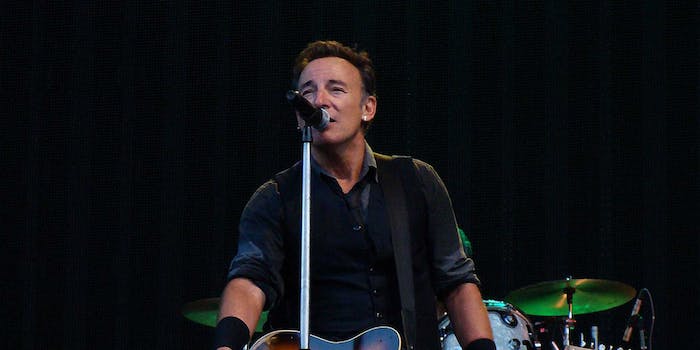 This Sunday, you can listen to Bruce Springsteen’s new album on CBS.com

When thinking about what screams “rock and roll,” a nod to The Boss is inevitable. A nod to a network best known for hacky multi-cam comedies and endless CSI spinoffs? Not so much. Yet here we are, living in a world where Bruce Springsteen is now trying to sell albums by partnering up with CBS to exclusively stream his latest High Hopes a week before the album debuts.

Starting Sunday, January 5th, after that evening’s episode of The Good Wife, the network that’s usually aimed at pleasing people who are in bed by 10 p.m., not partying until 10 a.m., will be streaming Springsteen’s full album on CBS.com. A January 12th episode of The Good Wife will feature multiple songs from the new record, and the album will stay online till the 13th, before releasing officially on Tuesday, January 14th.

While it’s no secret that Springsteen’s original fans are perhaps a bit on the veteran side, the Columbia Records-CBS marketing gimmick is a head-scratching move. No doubt the partnership will expose the new album to a demographic that’s loved The Boss since 1975’s Born To Run, but aging rockers with new albums generally tend to do well regardless of silly marketing tie-ins. Pearl Jam’s latest Lightning Bolt topped the Billboard charts in its first week when it debuted this October, despite shaky critical reception. Springsteen’s own Wrecking Ball, the last album he performed, also took first place on the Billboard charts when it released in 2008. It was the rocker’s 10th number one album in his career, and a direct sign that his staying power has in no way diminished in recent years.

High Hopes has already seen one inadvertent promotion: an Amazon error that led to the album being leaked the weekend prior to New Year’s Eve, when each track was available for individual purchase on the e-retailer’s website. Once the tracks were out, they quickly popped up on file-sharing sites across the Web, though if a CBS audience is who Columbia is targeting, it remains unlikely that your parents will learn how to use Pirate Bay anytime before the album actually goes on sale.