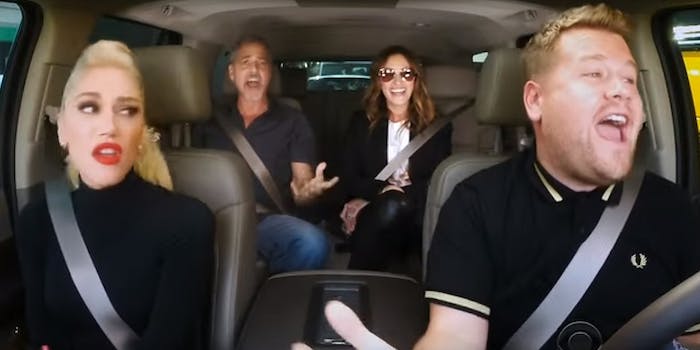 For more than a year now, James Corden has recruited musicians from all walks of life to get him to work faster through the carpool lane. But when he hit a lane requiring four passengers, he had to pull in even more star power.

At first, it seemed like your average episode of Carpool Karaoke. Corden and Gwen Stefani sang some of her greatest hits while they drove around Los Angeles. Then they found themselves in a four-person carpool lane, and they couldn’t stay there on their own. So Corden pulled some strings to rope in George Clooney, who then brought in Julia Roberts.

Watching Corden sing “Bananas” and “We Are the Champions” is a delight in itself. It’s even better when everyone’s getting in on the silliness in four-part harmony.