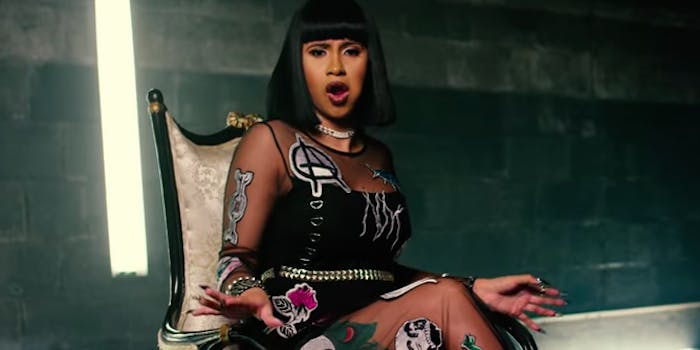 She doesn't hold back.

Cardi B is not happy about paying taxes and posted a video on Instagram on Thursday demanding to know what the government is doing with her money.

“So you know the government is taking 40 percent of my taxes and Uncle Sam, I want to fucking know what you’re doing with my fucking tax money!” the Bronx rapper’s rant begins.

“I’m from New York and the streets is always dirty, we was voted the dirtiest city in America,” Cardi B said of her hometown. “There’s still rats in the trains.”

Cardi shot to success in the last year after the release of her debut single Bodak Yellow through Atlantic records in February 2017. Since then she has collaborated with Bruno Mars and knocked Taylor Swift off the top spot on the Billboard Hot 100 chart.

In just two years her net worth has grown to an estimated $4 million. At a tax rate of 40 percent, the government will have taken nearly $2 million.

As the video runs on, Cardi compares taxes to charitable donations and requests an itemized receipt of how the funds are being used. She wants answers and is holding nothing back.

“When you donate, like, to a kid from a foreign country, they give you updates of what they’re doing with your donation,” she continues. “I want updates on my tax money!”

Whether the Treasury Department will issue a response remains to be seen.