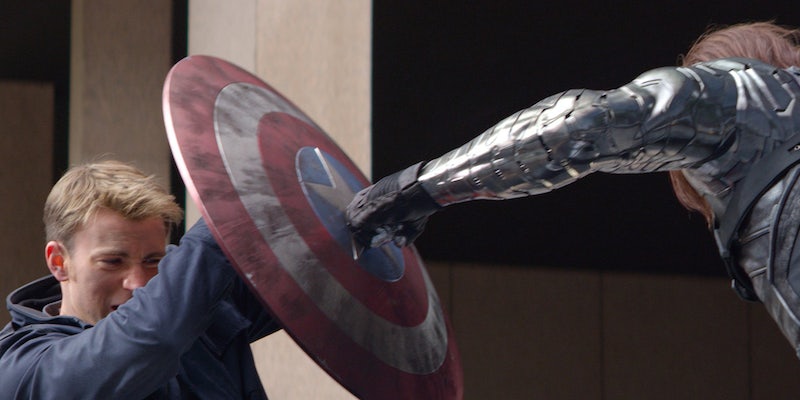 Captain America: The Winter Soldier was too good to mock. Here's why.

The Honest Trailers YouTube channel has been skewering Hollywood movies for two years now, making fun of obvious cliches and plot holes in movies like Twilight, Transformers, and superhero franchises. But Captain America: The Winter Soldier may be the first movie to beat Honest Trailers at its own game.

When the honest trailer for Winter Soldier came out last month, subscribers were surprised to discover that it really didn’t make fun of the movie at all. Actually, Honest Trailers could barely find anything to pick apart, with most of their criticisms being linked to other parts of the Marvel franchise. “This one was hard, you guys,” they wrote in the video summary.

Basically, Captain America: The Winter Soldier was too good to mock. And as it turns out, there’s a reason for that. The film’s directors are fans of Honest Trailers, and they purposefully engineered the film so it would be harder to parody.

In a recent interview with Collider, Winter Soldier directors Joe and Anthony Russo were asked how they felt about achieving a positive Honest Trailers review. Joe Russo answered:

“Flattered and amused. What’s so funny is that I’m an avid honest trailer watcher. I love it, it cracks me up… We used to sit in the room and go, ‘This is not going to end up in an honest trailer. This logic isn’t sound enough yet.’ We literally tried to Honest Trailer proof the movie.  Because what Honest Trailers really is… is ‘How sound is the logic in your film? How ridiculous are the buys that you’re asking the audience to make?’ So we would just comb through the script over and over again and go, ‘How do we shore up this logic?’ So it was a very helpful exercise for us.”

So, the good news is that some filmmakers do actually listen to fan criticism, even from YouTube parody channels. Although of course, Honest Trailers aren’t just there to make people laugh; they pick up on genuine, usually very stupid flaws that were left in Hollywood movies due to lazy storytelling.

If more directors took a leaf out of the Russo brothers’ book, we wouldn’t have to tolerate nearly so many plot holes every time we go to the movies.