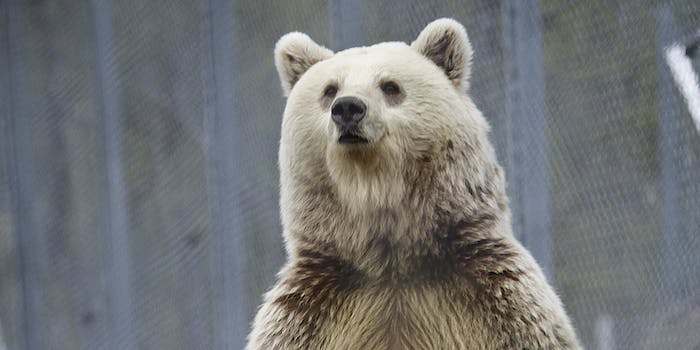 TV fans beware: This bear is vicious in its pursuit of straggling TV shows.

The Cancellation Bear is aimed at two groups of people: those who view TV ratings with the same kind of enthusiasm as baseball statisticians and those who follow a TV show that may be on the cusp of being axed by its network. The idea is simple yet evocative. If a TV show’s ratings are dropping, it begins to lag behind. The more it lags behind, the closer it comes to being caught and eaten by the Cancellation Bear.

#Revenge ratings fall to a series low, the bear’s teeth are inches away https://t.co/76Canvj8z9

#Cristela ratings sink, it can feel the hot breath of the bear directly behind it https://t.co/677hHLMrDK

#Selfie & #Forever will join #ManhattanLoveStory in the bear’s stomach by Christmas.

The bear is merciless in the face of fans trying to make excuses over why their favorite show is failing. The account, affiliated with the TV stats site TV By The Numbers, uses the site’s Fan Excuse Bingo card to slap down any viewers who blame a show’s ratings troubles on it “needing time to grow” or on the network running episodes out of order.

If you’re overly invested in the future of a particular show, it’s probably best to avoid following the bear on Twitter. It doesn’t care about your feelings, and it definitely doesn’t care about the supposed quality of your favorite series. Ratings are the only relevant thing here, and the bear is an expert. But if you’re the kind of person who likes inside-baseball TV industry minutiae, the bear may be a good place to start.

When Jay Cutler puts up terrible numbers, do people tell the sports media it’s “mean” to mention it? As the bear does when a TV show tanks?

As always, extra scripts ordered are a payday for writers, but an irrelevant indicator of show futures.

It’s probably just as well Twitter wasn’t around in the early 2000s. Imagine the Joss Whedon fandom meltdown that would have occurred as the bear closed in on Firefly.

Photo via Taral Jansen/Wikimedia (CC BY 2.0)