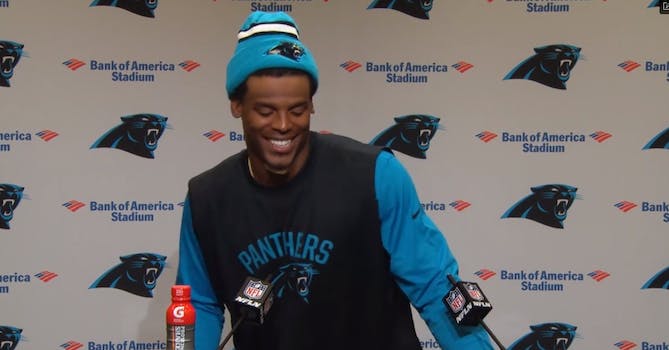 Newton has yet to acknowledge the incident, which lit up social media Wednesday evening.

“Devin Funchess has seemed to really embrace the physicality of his routes… and getting those extra yards. Does that give you a little bit of an enjoyment to see him kind of truck-sticking people out there?” Rodrigue asked.

Newton smirked while Rodrigue asked her question, and then made a sexist comment.

“It’s funny to hear a female talk about routes… It’s funny,” Newton said, before waving off the question about Funchess. “Fun is coming along, man. This is a big game for him.”

Rodrigue tweeted that a one-on-one, post-press conference conversation with Newton did not clue in the star QB to his gaffe. “I don’t think it’s ‘funny’ to be a female and talk about routes. I think it’s my job,’ Rodrigue tweeted.

Hours later, she elaborated on Twitter: “I was dismayed by his response, which not only belittled me but countless other women before me and beside me who work in similar jobs. I sought Mr. Newton out as he left the locker room a few minutes later. He did not apologize for his comments.”

Newton has yet to acknowledge the incident, which lit up social media Wednesday evening.

But the NFL, beleaguered amid a wave of high-profile protests, ratings struggles, and research hinting at long-term brain trauma for its employees, quickly stepped in to criticize Newton’s comments.

“The comments are just plain wrong and disrespectful to the exceptional female reporters and all journalists who cover our league,” an NFL spokesman told NBC Sports.