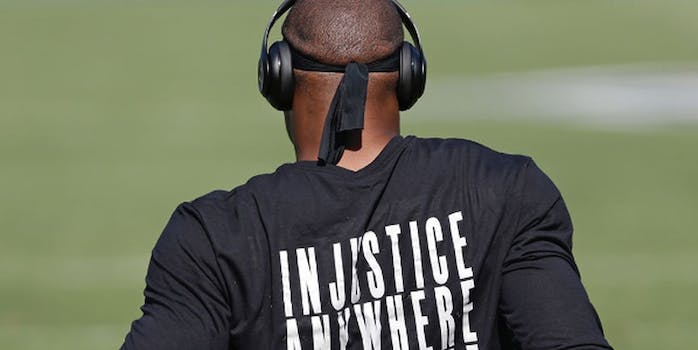 'Injustice anywhere is a threat to justice everywhere.'

Following a week of protests in Charlotte, North Carolina, amid the shooting death of Keith Lamont Scott at the hands of police, hometown superstar Cam Newton of the NFL‘s Panthers on Sunday donned a black T-shirt with a Martin Luther King Jr. quote: “Injustice anywhere is a threat to justice everywhere.”

The T-shirt was photographed during the team’s pregame on-field drills. The quote comes from King’s “Letter From a Birmingham Jail.”

Newton, unlike colleague Colin Kaepernick, has been a more buttoned-up leader amid political pressure to take public positions. He’s called doing so a “lose-lose” situation in the past, but this week offered the following statement to reporters: “I’m an African-American. I am not happy how the justice has been kind of dealt with over the years. … But we also, as black people, have to do right by ourselves. We can’t be hypocrites.”

But for all the political heft that a universal quote from King may muster, Newton likewise used his public practice session Sunday morning to honor the late Prince via purple cleats. The Panthers are playing the late rock star’s hometown Minnesota Vikings, after all.

It’s a lot of flash and sauce for one of America’s most visible athletes, but no word yet on what exactly it all means.