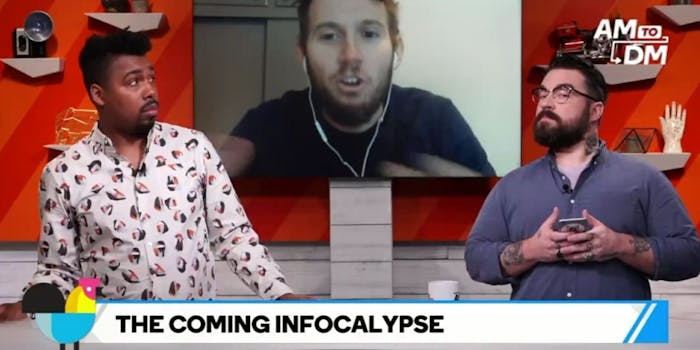 How ‘AM to DM’ became Twitter’s best, and only, morning talk show

The BuzzFeed experiment is paying off.

In the media world, everyone knows Twitter is an ineffective way to get pageviews. Only a small percentage of Twitter users click links that reporters tweet, and there are just so many egg followers out there cooking the books.

The hosts of BuzzFeed’s daily Twitter show, though, don’t care about any of those sobering barriers. Their morning show, AM to DM, proves that if you have the right topics of conversation and the right hosts who can carry it along for an hour, you can make it work. Besides to Isaac Fitzgerald, the former book editor of BuzzFeed and now a co-host on the show, hosting a daily morning show on Twitter makes perfect sense.

“Twitter is the place to go for news,” Fitzgerald told the Daily Dot. “That’s just the truth, hands down. I’m a book editor, if you want to talk about people saying something is dying.”

AM to DM, which airs every weekday at 10am ET, isn’t only a news show, though. It’s a talk show that gives off a podcast vibe in its loose but lived-in chatter. It looks polished yet personal like a YouTube vlog. It tries to engage the audience like a morning zoo radio show.

“We can’t pretend that Robin Roberts doesn’t have a hand in inspiring this work,” said co-host Saeed Jones. “But what’s cool is that we’ve been given an opportunity to apply all that we’ve learned from all these different people and their properties that we’ve admired.”

On a recent episode of the hour-long show, there was an interview with a BuzzFeed technology writer discussing laser phishing.

"Laser phishing," the automated version of email phishing, is a potential method for hackers to get your info by scanning your social media profiles and posing as someone you recently interacted with, reports @cwarzel pic.twitter.com/av2xdZQc4t

There was a conversation with the director of a feature film about a 14-year-old struggling with gender identity.

The director of new movie “Saturday Church” explains how he brought the story of a trans person of color to life pic.twitter.com/Eo3htEsowZ

There was a segment on K-pop.

K-Pop is definitely having a moment in the US — @_sarahdipity_ breaks down why pic.twitter.com/f9UR3Tgy7n

And a quick discussion about the unveiling of the Barack Obama portrait.

According to the show, AM to DM averages more than 1 million views per episode (during one week in mid-January, that average increased to 1.4 million views). Total reach continues to increase month over month, as measured by tweet impressions, and nearly a third of the show’s audience watches from outside the U.S.

One reason why, Jones said, is because the show has a flexible component. Whether it’s the hosts’ capability of pivoting to different topics of conversation based on what Twitter users are discussing or the ability to shape-shift formats, that pliancy is a virtue in Jones’ eyes.

“We were interested in using the show to create a space,” Jones said. “Oftentimes, it’s going to be that show with the sets and the guests. But what else can happen in that space? It’s having that agility. News is wild. As we continue to grow and as we become more agile as a crew, that’s going to be interesting to see where that flexibility goes.”

The formatting of the show is pliable. The hosts are flexible. And the audience seems to be engaging.

Fitzgerald and Jones didn’t know if a show like this would work because a show like this didn’t exist on Twitter. What they’ve found is that Twitter isn’t dying. It’s very much alive and delivering viewership to BuzzFeed.

Jones and Fitzgerald, though, know this.

And as long as the conversations continue on Twitter, AM to DM wants to be the ones to shepherd us through them.