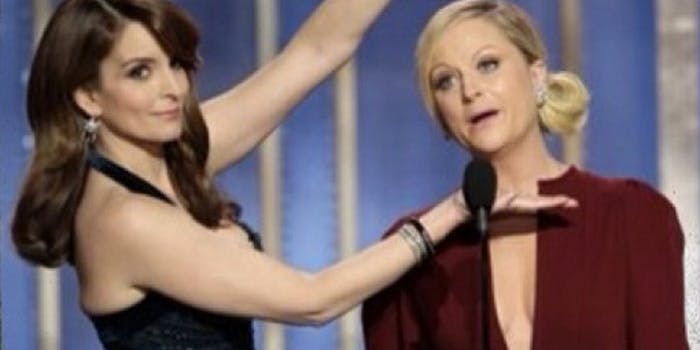 On Sunday night, stars from film and television hobnobbed and congratulated one another at the 70th annual Golden Globes in Los Angeles. Amy Poehler and Tina Fey led the three-hour event, which saw awards given to Ben Affleck for Best Director (Argo), Jennifer Lawrence for Best Actress in a Comedy, and Hugh Jackman for Best Actor for his role in Les Misérables.

We live-GIFed the action on our Tumblr, so let’s take a look at some of the highlights.

1) The action kicked-off with an uproarious opening monologue from two Saturday Night Live alumnae, who asked Daniel Day-Lewis for his best ET imitation.

2) Adele made her post-baby debut in style by taking home an award for Original Song in Skyfall.

3) Will Ferrell and Kristen Wiig made their cases for being next year’s hosts by hilariously botching movie plot lines.

6) Aziz Ansari was entirely convinced the stately cast of Downton Abbey got him stoned.

7) Jodie Foster won the Cecil B. DeMille Lifetime Achievement Award and came out … as single in a rambling speech that wowed viewers.

9) We miss them already. Can they host every award show?