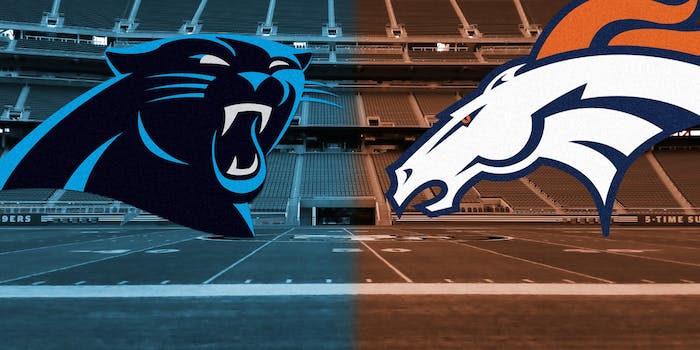 If Peyton Manning retires, this was a blaze of glory.

Entering Super Bowl 50, most likely the last game of Peyton Manning’s career, the conventional wisdom stated that the Broncos defense would have to be the ones to lead Denver to the victory. Manning, in his 18th season, had lost too much arm strength and no longer had the essence that made him one of the best quarterbacks in NFL history.

All of that was true Sunday vs. the Panthers. Manning was mostly mediocre or worse, and for a guy who will be a surefire Hall of Famer the moment he’s eligible, the 39-year-old showed why he’s no longer a consistently effective starting quarterback.

But there’s something to be said for experience. Manning has 28 playoff games of it, including three previous Super Bowl appearances. Cam Newton had no Super Bowl experience. And unlike Manning, Newton didn’t get much help from most of his teammates. Thus, in Denver’s 24-10 victory, it was Manning, the game manager who happens to have a dominant defense, vs. Newton, who tried to do too much in lieu of too little support.

Manning is the winner, and now he can ride off into retirement, secure in his place in the game’s history. He told CBS’ Tracy Wolfson after the game that “I’ll take some time to reflect” on his future, but it seems highly unlikely that he’ll return for the 2016 season.

Yet, as great as Manning’s career has been, his performance was mostly incidental to the outcome of the Super Bowl. The way we realized the Broncos coaches felt the same way? When, on a third-and-nine with less than six minutes to play and only a six-point lead, Denver’s offense basically conceded the ball, handing it to back C.J. Anderson and looking to run more time off the clock rather than take a chance and go for the first down.

Denver was going to let its defense—and not Manning—win the Super Bowl.

Broncos have been trying to run out the clock since the second quarter. #SB50

Dear anyone watching the Broncos for the first time: All of their games look exactly like this.

And you know what? It worked, thanks in large part to linebacker Von Miller.

Even worse for Newton? For as hard as he tried this game and for how well he played this season—he was the league’s MVP, after all—he’s going to be remembered for not trying to dive on the fumble and keep possession for his team.

Sacks weren't Cam's fault. But he has to dive on that loose ball. Has to. Your team is within 6 pts in the Super Bowl at that pt.

Alas, the only one dabbing on Sunday was Betty White.

Though the Panthers were a six-point favorite heading into the game, Denver made the first big play of the night, while also seeking to shake Newton’s confidence. After an exciting opening drive sputtered out and ended with a Broncos field goal, Denver’s defense injected some excitement in the matchup when Miller stripped the ball from Newton midway through the first quarter, leading to a fumble recovery in the end zone from the Broncos and a 10-0 lead.

Newton’s reaction at the moment was reminiscent of some of the most classic of cartoons.

The Broncos defense was tough all game, sacking Newton seven times (Miller had 2.5 sacks by himself) and hitting him hard on many other occasions. While Newton has relied on tight end Greg Olsen this season—mostly because the Panthers receiving corps isn’t one of the team’s strengths—Denver kept him irrelevant for much of the game.

Meanwhile, Newton had to make plays with his arms and his feet, and he simply didn’t have enough to win the game himself.

But in the second quarter, Panthers running back Jonathan Stewart—who had sat out a few minutes earlier in the half with a foot injury and who was questionable to return at the time—made a superhero-like jump to get Carolina its first score of the contest.

Aside from that, the Panthers’ offense struggled, and though the Broncos offense wasn’t much better, Denver got help from its special teams—Jordan Norwood’s 61-yard punt return was the longest in Super Bowl history, punter Britton Colquitt averaged 45.9 yards per kick and constantly changed field position, and kicker Brandon McManus nailed all three of his field goal attempts.

Manning finished 13 of 23 for 141 yards and an interception. Those numbers are pedestrian and not worthy of the player Manning used to be. But he’s got his second Super Bowl title, and he’s thankful.

“It’s very special,” Manning said in the immediate moments after the game. “This game was much like this season has been. It’s tested our toughness, our resilience, our unselfishness. I just feel very, very grateful.”

He should. That Broncos defense—and Miller—were simply remarkable and won him another title.