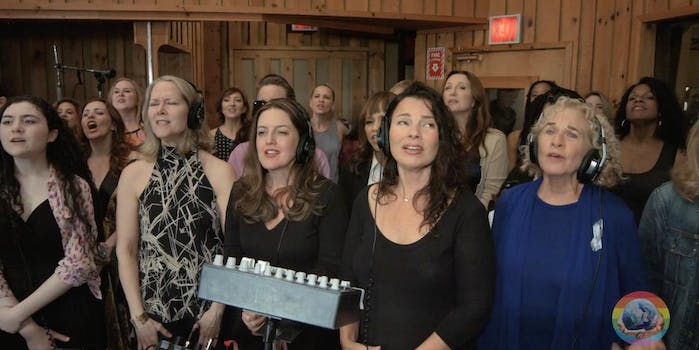 Coming off a Tony’s tribute to the victims of the Orlando shooting last week, 65 artists and actors in the theater community have teamed up to record a new single that will benefit the GLBT Community Center of Central Florida.

Recorded last week at Avatar Studios, they covered Burt Bacharach’s “What the World Needs Now is Love” to honor those who died or were injured at Pulse nightclub, as well as the LGBT community. It’s reminiscent of earlier charity singles such as “We Are the World” and brings stars from Hamilton; Shuffle Along; Waitress; Frozen; She Loves Me; singers like Gloria Estefan; Carole King; and Sara Bareilles; and Hollywood performers together. A short PSA precedes the music video as many of the performers condemn the senseless violence in Orlando and proclaim that “love must prevail.”

You can purchase the single through Broadway Records, which will soon also be available on iTunes.