‘Britney Spears: American Dream’ is a mobile game that makes you work, b***h

In Britney Spears: American Dream, you have a chance to go from record store droid to buzzed-about singer—with Spears’s assistance—but you must constantly find new contacts and go to events and flirt to try to get your name out there and get a single recorded and perform. There’s a lot of standing and schmoozing and promoting, and American Dream did not provide the most sensible selection of shoes for this kind of work.

The premise is simple enough: You’re a Microbe Music employee tasked with restocking CDs, but then a friend calls to tell you Spears is at the Starbeans next door. Obviously you must leave your job and talk to her. Spears orders a Strawberry Whippaccino (they even spell her name wrong on the order!) and your in-app bestie, Sara, urges you to do an impromptu open mic, because you can. 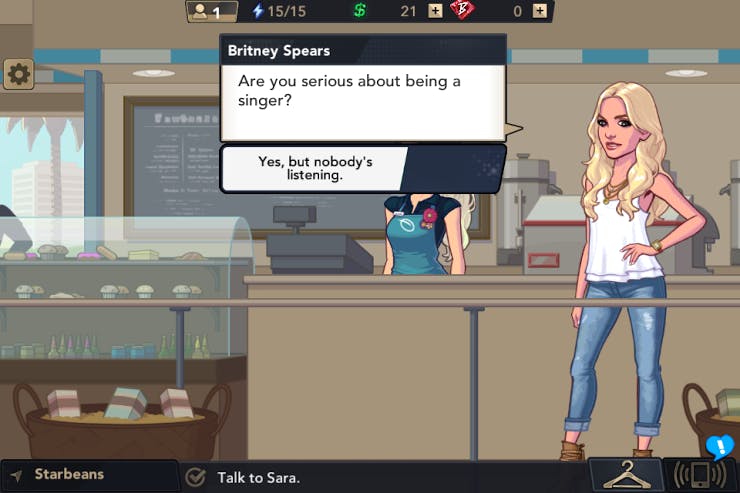 It’s the latest venture from Glu Mobile, a developer of freemium mobile games. Glu was responsible for Kim Kardashian: Hollywood, which debuted in the summer of 2014 and ensnared millions who desired to be virtual A-listers. By November 2014, the app had taken in $43 million and allowed users to get gay-married on it. In March, Kardashian claimed on Twitter that she’d earned $80 million from the game, though its popularity has declined significantly and the company saw layoffs last year.

Earlier this year, Glu debuted Kendall & Kylie, hoping to further cash in on the family brand. The company is also set to release apps for Taylor Swift and Nicki Minaj.

“I think that people are always looking for a way to get closer to the celebrities they idolize,” Glu’s CEO Niccolo de Masi tells the Daily Dot.

He relates that the viral success of Hollywood was a “combination of Glu’s proven game engine” and Kardashian’s “brand power.” Seems like a simple formula, but last year, the San Francisco-based Glu put out Katy Perry Pop and it flopped. Some “internal execution challenges” were to blame, as well as “fans expecting a mechanic more integrally tied to Katy Perry’s music.

“We’ve learned from both our Kim and Katy games and have integrated a master track and several instrumental versions of Britney Spears’s most iconic songs,” de Masi explains.

The focus on Spears is a little different than Kardashian and Perry. Spears is more of an early aughts commodity, though she has enjoyed a resurgence in recent years. She briefly woke up the Internet with “Work Bitch” in 2013 but has seen more success with merchandising and a Las Vegas residency at Planet Hollywood—a location in the mobile game.

Her fanbase is also a little different, says de Masi: “She appeals to older millennials who grew up listening to her music early on in her career, as well as Generation Z fans who may just be discovering Britney.”

The app paints Spears as a starmaker, and aspiration is the foundation of these games: The player must work his or her way up from unknown to superstar, completing a series of quests that often take artists years. There are characters that push you to live the dream, like rival Aston Kole and manager Anne Means. The game allows you to change your name to something more palatable or buzzworthy. She didn’t come out and say it, but I could tell Britney wasn’t thrilled with Krysallis Winterbottom.

It’s a candy-colored, handheld exploration of fame that shows the positive and aspirational parts of the process. The sexism, abuse, and harassment aimed at female artists is not part of this experience. This is about mechanics: tapping a button and getting a quick rush in a new version of Choose Your Own Adventure. In this American dream, you’re focused on work and your brand and how to survive in the virtual economy.

So what exactly is the “American dream” these days? De Masi’s definition goes beyond a mobile game:

“I think these days the American dream is as important as ever in the world—freedom of speech and expression, democracy, capitalism, and hard work being rewarded.”