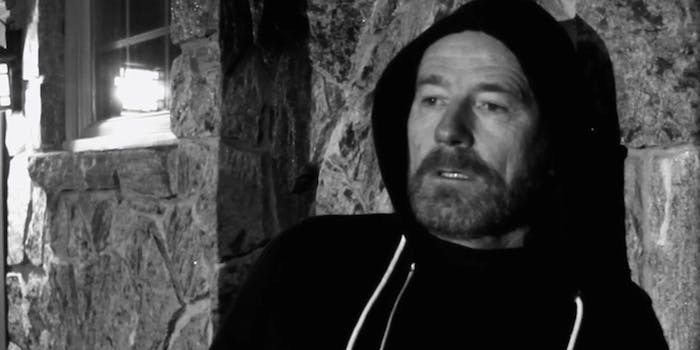 One filmmaker's writer's block was re-created by the Breaking Bad star.

As Hurricane Sandy approached New York and New Jersey in October 2012, filmmaker Brandon Polanco was on the set of the drama Cold Comes the Night in upstate New York. He was one of the film’s production assistants, but the looming storm brought production to a standstill during the first week.

That’s when Breaking Bad’s Bryan Cranston, one of the film’s stars, decided to hold a contest just for the PAs: He asked them to write a script in one night, and he would star in whichever one he chose. The next day, he did a blind reading, and chose Polanco’s screenplay for Writer’s Block.

“I do not know why Bryan wanted to create this little contest,” Polanco related via email. “But I’m pretty sure of one thing: It was for the essence of true storytelling; write a script, get a camera, screw the money, and tell a damn good story. Bryan loves to tell stories and create; he wanted to use his time off and make something with it, especially since we were staying on location in the middle of nowhere. I started writing the script the moment I heard about the contest.”

Polanco released Writer’s Block on Vimeo last week, where it’s already racked up tens of thousands of views. It follows up his 2012 film, Snapshot.

In the black-and-white short, Cranston plays a writer struggling with the titular affliction, chasing his muse (Lela Edgar) through the hallways and lobby of an unnamed hotel, an alternate setting for the writer’s own mind. Polanco, a onetime Austinite, says he thought of 8½, and how Fellini used his real-life writer’s block to create a fantasy world and alter ego. The setting’s isolation—and the impending wrath of Mother Nature—helped him construct the physical manifestation of writer’s block. Cranston became his Guido Anselmi.

“I would say what holds the piece together is Bryan’s character, the writer,” he added. “He chases after Lela Edgar’s character to find himself, while traveling through his mind, each sequence leading him down the surreal tunnel of his brain. Bryan, I feel, very much exudes a sense of myself as the writer. He depicts emotions that youthful writers have: Hopes to be good, the strife that I cause myself for affirmation of my work, and the constant feeling of loneliness some writers bear.”

Though the short has yet to see distribution, Polanco says he decided to place the film on Vimeo and YouTube because “it was time.” If anything, this experience could serve as a teachable moment for aspiring filmmakers: Always have that script in your back pocket. You never know when it might be your time.