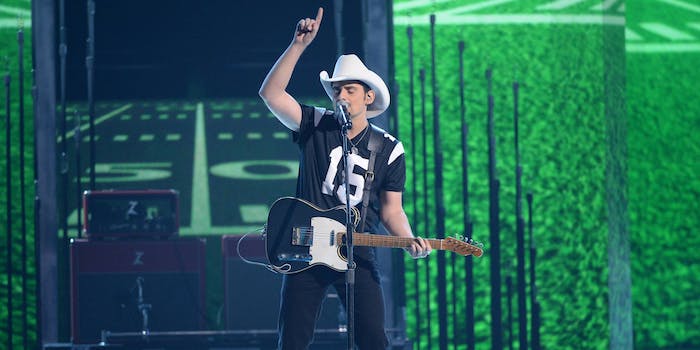 Country singer Brad Paisley is turning to GoFundMe to help the victims of last week’s floods in West Virginia. The flooding killed at least 25 people and destroyed thousands of homes on June 23.

For Paisley, who hails from West Virginia, it hit close to home. The floods affected entire towns as well as the majority of West Virginia’s 55 counties. Three of those counties were declared federal disasters. Paisley quickly expressed his shock at the natural disaster while urging media to pay attention to West Virginia while the U.K.’s Brexit vote (and its immediate aftermath) dominated headlines.

I am heartbroken for West Virginia, seeing all the flooding and devastation. Please be safe.

A few days later, Paisley teased that he had something in the works to help West Virginia. In a Facebook Live video, Paisley played a cover of “Country Roads” before announcing the GoFundMe campaign for the West Virginia flood victims.Paisley wanted to do this right, and as a celebrity from West Virginia, he felt that he had a responsibility to keep the disaster visible. He explored his options before settling on GoFundMe. With an initial goal of $1 million, all of the money will go to the Brad Paisley Foundation at Wesbanco Trust Department in Wheeling, W.V. The country superstar assures his viewers that every dollar will go to the victims. He kicked off that goal himself with a $100,000 donation and spoke of West Virginia’s resilience.

As of press time, Paisley’s GoFundMe campaign has raised more than $229,000 of its $1 million goal.