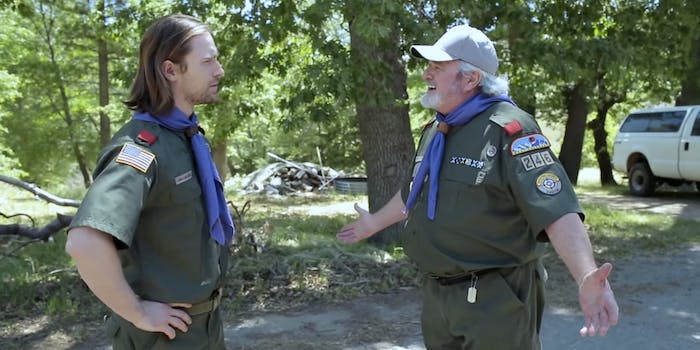 Eagle Scout and independent filmmaker Jeffrey Simon is a successful product of the Boy Scouts of America—he just can't be a part of the organization anymore.

If the aim of the Boy Scouts of America is to build self-reliance in boys and young men, then Eagle Scout and independent filmmaker Jeffrey Simon is a successful product—he just can’t be a part of the organization anymore.

Not only has he managed to launch his Scout-themed webseries, Camp Abercorn, with an impressive trailer, but he has also managed to rope in Brad Leland (Friday Night Lights’ Buddy Garrity) as the camp’s ranger.

Despite this current policy, Simon clearly still loves the Scouts, and his passion for this project is visible. His primary focus is on the experiences of working outdoors in nature with a group of guys as they struggle to find themselves. Although the gay issue will be a storyline, it’s not the entire show by any means; rather, Simon uses the series as an opportunity to showcase what he loves about the organization, something that recently he says has been overwhelmed by “the prejudice of a few policy makers.”

Simon hopes to “re-direct the conversation away from executives in fancy offices and bring it back to the values of scouts and importance of camp” and concentrate on the tenets that established the Scouts as a “symbol of the prowess of America.”

The series, which currently has an Indiegogo campaign, is aiming for a release on YouTube, with an intended run of seven 30-minute episodes.

Correction: An early version of this article’s headline misspelled the title of the webseries.