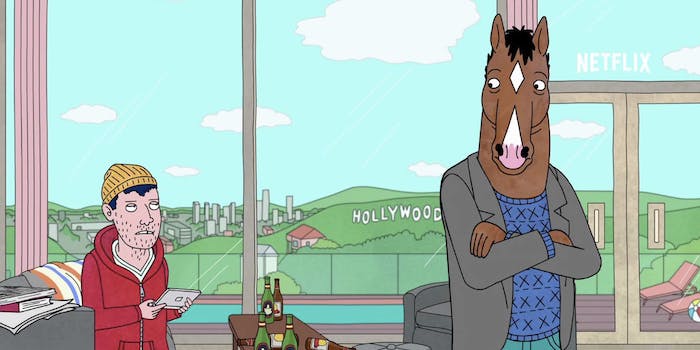 Saddle up for more ‘BoJack Horseman’ this summer

The show promises to be bleaker than ever.

For those of us addicted to its singular mix of cynicism, sentiment, and silly animal jokes, the wait for a second season of the animated Netflix series BoJack Horseman has been a long one. But it’s very nearly over.

That’s just two months away—we can make it, you guys. The show will pick up with our eponymous anti-hero, “the legendary ’90s sitcom star” who till now has “been trying to find his way through a muddle of self-loathing, whisky and failed relationships,” rebuilding his joke of a reputation.

Now starring in his dream movie (a biopic of Secretariat), but humbled by the events of last season, BoJack attempts to use his career second wind as a stepladder to a springboard to becoming a newer, better BoJack. But new challenges on set and in his personal life, and the demons of his past, make it difficult to shake off the skin of his previous self. If season one of BoJack Horseman is about a character learning he needs to change, the new season is about whether or not he can. It’s a character in a rut, trying to pull out of that rut, and the rut pulling back.

Sounds like the writers will have more than enough opportunities to get way, way dark—which you might say is their specialty. Now let’s quit horsin’ around and get this show on the road!