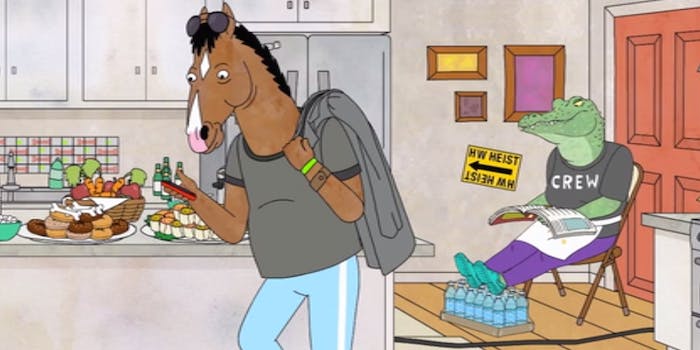 His gender philosophies are as good as his sitcoms.

The world of BoJack Horseman is a peculiar one to say the least. Anthropomorphic animals coexist alongside humans as functioning members of society with absolutely no explanation as to why. A washed up sitcom actor who just happens to be a horse struggles with drinking, drugs, depression, and all the other vices of Hollywood. Paparazzi blue jays try to blackmail agents with salacious photos of their clients, and that’s just the start of it.

But even an animated world as upside down and nonsensical as Bojack’s Hollywood isn’t immune to the very real issue of gender in comedy. It’s a stigma that series creator Raphael Bob-Waksberg isn’t only aware of, but tries actively to work against.

On Wednesday, the creator of the Netflix original comedy took to his Tumblr to field questions from fans about the show. One devoted viewer took the chance in to inquire as to where in the creative process sight gags are added. But in their haste to ask where the idea for a craft services crocodile wearing crocs comes from, things got mis-gendered. 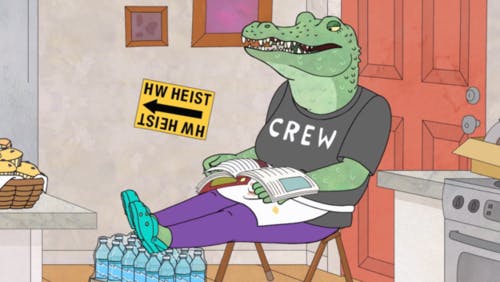 Though comedian and podcaster Kulap Vilaysak voices the aforementioned reptile, the question poser labeled the croc as a “he,” leading Bob-Waksberg to go on a brilliant tangent about society’s problem with viewing “comedy characters as inherently male, unless there is something specifically female about them.”

To break down the psychology behind that exact thought process, he called upon another sight gag from the show’s first season in which one of the storyboard artists had designed a bit that centered on a businessman standing next to a dog with droopy jowls on a curb. As a car drives past, the dog’s flabby cheeks and tongue are blown onto the businessman’s face, leaving him soaked. A fresh take on car spraying water on those standing on the sidewalk, if you will. 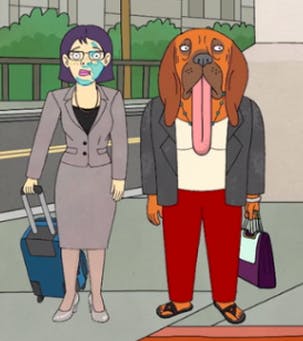 But when head designer Lisa Hanawalt came back with mock ups for the characters, she had drawn both the dog and the business executive as female. At first, the depiction didn’t sit right with Bob-Waksberg. But when Hanawalt asked why, he couldn’t come up with any viable answer.

The thinking comes from a place that the cleanest version of a joke has as few pieces as possible. For the dog joke, you have the thing where the tongue slobbers all over the businessperson, but if you also have a thing where both of them ladies, then that’s an additional thing and it muddies up the joke. The audience will think, “Why are those characters female? Is that part of the joke?” The underlying assumption there is that the default mode for any character is male, so to make the characters female is an additional detail on top of that. In case I’m not being a hundred percent clear, this thinking is stupid and wrong and self-perpetuating unless you actively work against it, and I’m proud to say I mostly don’t think this way anymore.

To help emphasize his point about how ridiculously behind society is when it comes to gender, the BoJack creator recalls an anecdote he read about the drama behind the scenes of The Brave Little Toaster. According to Wikipedia, one crew member became so enraged that a woman had been hired to voice the appliance, that he stormed off set never to return.

So if you need help trying to rid yourself of this outmoded thinking, ask yourself the same question Bob-Waksberg does. “Is there anything inherently gendered about what this character is doing? Or is it a toaster?”