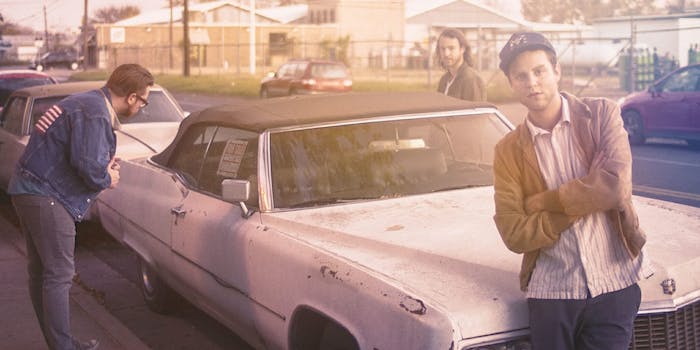 For the locals, the times are a changin'. And they don't mind one bit.

How do you spot three Texas musicians amid the chaos of South by Southwest? In a venue riddled with sound techs, promoters, and out-of-towners smack dab in the center of Austin, Texas’s most notorious party street?

Keep an eye out for worn baseball caps, shaggy facial hair, and an easy-going confidence strengthened from years of performing at these kinds of things.

The locals from Blue Healer are at SXSW playing a show just about every day of the week. They even opened for Third Eye Blind—frontman David Beck coolly described it as an “entertaining experience.”

They’re talking to the Daily Dot at the Rooftop bar on Sixth Street about their beginnings, futures, and optimism toward living in a world where we all pay $10 per month for Spotify despite a musician’s dubious position of needing to make money.

Fans are too busy tending to their hangovers to be here at noon, but festival-goers might recognize up-and-coming Austin band Blue Healer by their unconventional upright bassist frontman and an infectious, humor-driven chemistry.

The musicians teamed up last January after their former group Sons of Fathers suffered a “traditional implosion,” disbanding the six-piece Americana band in 2014. After being together three and a half years, the group announced an indefinite hiatus on Facebook, making the decision to put the brakes on following disillusionment with the music business and pressure to compromise morals and their very love for music.

“And the dust and the aftermath… and the Big Bang swirled around,” Beck says, as drummer Dees Stribling chimes in.

After the fallout, the trio gathered gear and got back to songwriting—their retro rock colored by distorted upright bass, analog synths, and drums. They cite the classics as their biggest influences, like Bob Dylan and the Beatles.

“Stuff my dad would listen to,” Beck says.

The band feels good about the fresh start, a new sound. A six-week tour comes after SXSW. Their blueprint is proudly traditional—write, record, drive around, play live.

“I think part of what’s going to make this band really successful is that we’ve been on the road together before,” keyboardist Bryan Mammel says.

But in this online-driven world, what’s the point of going on a strenuous tour as an unknown? Wouldn’t it make more sense to pay some college kid to run your social media?

We're chillin right here for 25 minutes before going to @AntonesNightclb if anyone wants to chill #sxswchill pic.twitter.com/dE9uB5rkUm

“There’s still a human element in music,” Mammel says. “There’s so much to choose from now. And what’s going to set you apart from other bands that I like as a fan, they’re the ones that I feel a huge connection with. I think it’s almost more important to be out there touring and to be doing those things than maybe ever before.”

Aside from the infinite supply of free sunglasses and mini-totes, the band says SXSW means invaluable mingling. Sure, record label suits aren’t approaching startup bands with briefcases of cash and contracts backstage these days—but you’d be surprised.

Just this week, a throwaway set brought luck. Half hungover, Blue Healer played an early show at a Whole Foods rooftop, taking notice that only some in the thin crowd were paying attention. A man approached them after the show—he liked the last song.

He was the co-CEO of Whole Foods.

“You say yes to as much as you can and all the things that you might not expect to be a thing might end up being a great connection,” Mammel says.

These digital preconditions have also reportedly given rise to monetary loss at the hands of the dominant streaming giants. A reported two-thirds of Spotify users do not own a subscription—opting for its free, ad-supported tier. With that comes the perpetual consumer expectation to stream anything, anytime.

But Blue Healer deems this method of listening to music as “the product of our times”—and they say the pros may very well outweigh the cons.

“Maybe there’s some revenue lost for artists here and there but at the same time you’re also accessible much more quickly without the backing of an entire system,” Mammel says.

Besides, Beck adds: “If we got into music for making money, we’d be shitheads.”

The band will release music videos this year, and they hope to release an album by the summer. It’ll probably be streaming on Spotify.