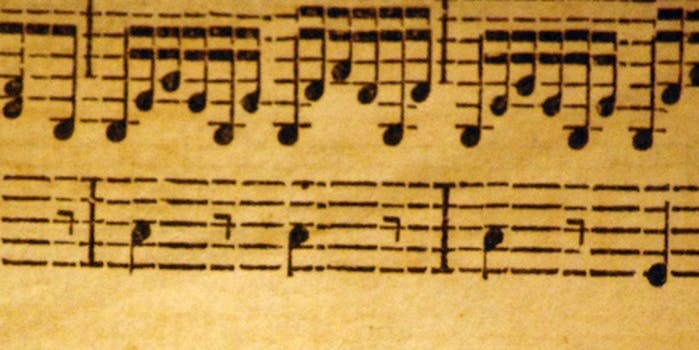 The corny SoundCloud jams of the alleged Silk Road 2.0 kingpin

As details about Blake Benthall emerge following his arrest in connection to Silk Road 2.0, a resurrected black market for drugs and other illicit goods, the alleged kingpin’s musical dabblings have piqued our curiosity. So we’re going to rank all his SoundCloud songs—which turn out to cover an impressive range—before Rolling Stone or the NME get wind of them.

Ideally you’d listen to these tracks while freebasing Oxycodone, but we’ll let that slide this once.

You already know how Christmas carols go, but here they are again, performed by Benthall and friends with the help of what sounds like an old but reliable upright piano. Charmingly ragged in places—just nothing you couldn’t manage with your own drunk family.

Getting there: The cityscapes

Five years ago, Benthall uploaded a bubbly, noodling series of laptop-pop sketches, probably assembled with the canned instruments of GarageBand or the like. They bear a passing resemblance to synthetic strains of the Postal Service, if you’re into that sort of thing. Since these tracks seem to be geography-based, we’ll mention that the West are best.

OK, then: The Christmas Journey cover

You might be sick of karaoke classic “Don’t Stop Believin’” by now, but what about a parody version featuring holiday lyrics and sung with cheerful gusto? Come on, you love this.

Composed for a stranger as part of a Reddit mixtape swap, this is a fairly emo piano ballad, and more than a bit meta, though damn if it’s not uplifting. Unlike most of Reddit.

These 12 ditties, dedicated to various women, show Benthall really stretching his wings, stylistically speaking. There’s gentle folk (“For Jenna”), a rollicking Bruce Springsteen-style number (“For Alicia”), spirited bluegrass (“For Kori”), bizarro funk (“For Kait”), overprocessed hip-hop in the vein of MC Chris (“For Brianne”) Auto-Tuned club R&B (“For Alli”), reggae (“For Reagan”), gospel (“For Laura”), and more. Like tapas for your ears.

And that’s all! Until Benthall gets around to penning his prison album, of course.

Photo by Steve Snodgrass/Flickr (CC BY 2.0)