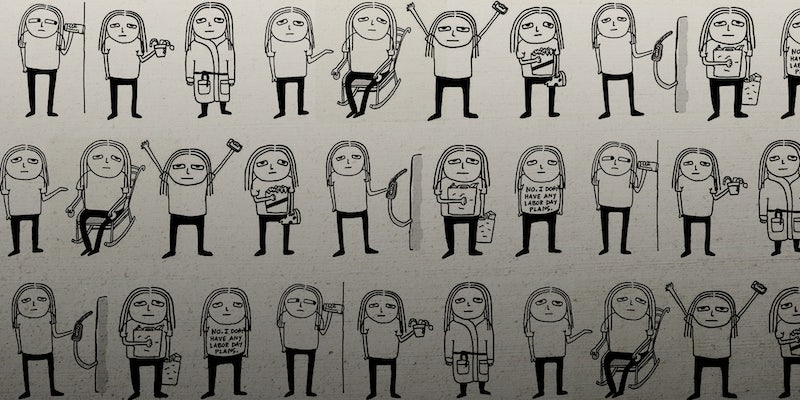 Comedian Mo Welch and her Instagram character Blair are very different, but she admits they’re pretty tight. Welch writes down the random depressing thoughts that cross her mind, and hands them over to her crude line-drawing creation.

Blair, also known as Barely Blair, isn’t an overthinker, nor does she have a sexuality other than “Don’t touch me” or “I am alone forever.” Those are just thoughts that come to Welch randomly, even if she’s having the best day ever. Over coffee in L.A.’s Silver Lake neighborhood, where she lives with her girlfriend, Welch explains that the idea for Blair came to her when she had hit a special sort of rock bottom. In many ways, it was the best thing that could have happened to her at a time when she felt ready to give up.

“I was going through one of my ‘I want to quit comedy because it doesn’t make any sense’ phases, and it makes you feel so vulnerable sometimes… like, you hate yourself,” Welch said while downing a pint of strong coffee. “I had left L.A. for the summer, and was at my mom’s house in Lombard, Illinois. I just got through a couple of breakups. I wasn’t sure if I would come back to L.A. I was feeling sad, and I found these sketchbooks in the basement that were my sisters’ and I had a Sharpie, so I was like, ‘Oh, I wanna try to draw a comic, because I want it to be super simple, just about the joke or the feeling.’ But I knew I wanted art attached to it.”

Blair has accepted her loneliness, mostly embracing it to the point of not giving a shit. Occasionally she will stalk an ex’s social media account, but mostly she’s just alone, broke, and content enough just eating ice cream in bed.

In her standup, Welch jokes about the nature of comedy as a strange “last resort” for creative people; her long-standing love affair with basketball; the real nature of stranger danger that every Uber driver inspires in female passengers; and the fact that for gay ladies, their hands are pretty much their dicks. Blair is merely an outlet for those random, dark, unwanted thoughts that creep into her brain.

Though Blair doesn’t appear on stage, if audience members listen hard enough, they might be able to find her in Welch’s voice. Anyone who knows Blair would definitely understand that standup comedy isn’t on her list of things to do. How could it be? She rarely leaves her apartment.